IS GENERAL JAMES E. CARTWRIGHT REALLY QUALIFIED TO BE THE NEXT CHAIRMAN OF THE JOINT CHIEFS OF STAFF? 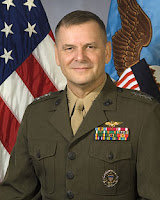 Other than being the most hated and liberal general officer in the entire US Military along with being President Obama’s BFF and consummate “yes man,” I’m not sure Marine Corps General Cartwright has the requisite experience, judgment or qualification to lead our Military. In addition to having the incredibly bad (or good) luck of not being able to squeeze in even one day of combat experience during his 40 years in uniform, he recently underwent a rather ugly Inspector General investigation and is in the midst of what is expected to be a messy divorce that could make the Schwarzenegger separation look like a love fest.

Commissioned in 1971, the General has been on active duty during the Vietnam War; the invasions of Grenada, Panama and Haiti; interventions all over the Balkans; OPERATIONS DESERT SHIELD/STORM/1st Gulf War; and 10+ years of OPERATION IRAQI FREEDOM and OPERATION ENDURING FREEDOM (Afghanistan), yet he has never heard a shot fire in anger. An incredible achievement equaled by few others with even a quarter of his active service.

Not withstanding his obvious talent for avoiding armed conflicts, I believe in these trying times it would be best that our Wartime Chairman have at least a little first hand experience in the art of War. Hence, maybe this is not the right time to OJT a neophyte when we have so many outstanding war tested candidates to choose from already serving in the Four Star ranks. In addition to the Obvious General Petraeus, we have Ray Odierno, Lloyd Austin, Carter Ham, Martin Dempsey, Jim Thurman and several others; all of whom have between 5 and 7 years in Combat. Why not select someone that has paid his dues and already knows a little something about War?

Complicating a Cartwright selection is that pesky IG Report. Despite the New York Times 23 Feb 11 headline declaring: “General Is Cleared of Sex Accusations,” Cartwright, who the Times calls “President Obama’s favorite General,” wasn’t quite “cleared” by the IG. The IG actually recommended disciplinary action only to be overruled by the Secretary of the Navy.

Seems what happened was the General was accused of having an improper physical relationship with a female military aide during a 2009 overseas trip to Tbilisi, Georgia, when the aide, drunk and visibly upset, visited the General’s hotel room alone and either passed out or fell asleep on a bench at the foot of his bed. The Inspector General (IG) investigated the incident and issued a report in March 2010, clearing the General of the most serious allegations but did find he mishandled the incident and questioned his judgment. The IG faulted Cartwright for not insisting the aide leave or be removed and said the Aide felt “licensed” to enter the general’s room late at night and drunk, despite being advised by a security agent not to do so. The IG report also faulted Cartwright for failing to act on an earlier incident in which the woman also apparently drunk had a disagreement with a Secret Service agent guarding President Obama at an elite Alfalfa Club dinner in Washington.

“Gen. Cartwright witnessed questionable conduct in both Tbilisi and at the Alfalfa dinner, but chose not to directly confront or correct [the] behavior,” the report states. “We conclude that Gen. Cartwright did not fulfill his responsibility to impress upon [the subordinate officer] the importance of sobriety and sound judgment.” Hence, the IG questioned General Cartwright’s judgment and command style in dealing with the aide and recommended administrative action for two lesser infractions: failure to discipline a subordinate and fostering an unduly familiar relationship, but Ray Mabus, the Navy secretary, overruled the IG’s recommendations and took no action.

Every officer should learn early in his (or her) career that every time they condone unacceptable behavior they have lowered the standard for discipline. Obviously the General was absent the day the Marine Corps taught that at his Basic Course.

Given the circumstances, maybe it would be best this time for the Nation and all Servicemembers if the President were to let competence and experience trump personal friendship and he were to select someone that was actually qualified. Of course the President would run the risk of having to listen to solid military advice rather then getting what he wanted to hear but that would be a small price to pay for providing the Nation’s Military with superior competent leadership.
Posted by A_COL at 6:28 PM No comments:

For those of you that linked here from my comments on the Washington Post Fact Checker hatchet job: "Newt Gingrich’s Pinocchio-laden debut" -- here is the Nancy Pilosi piece I referenced. Achieving four (4) Pinocchios puts Newt in some pretty elite company, a feat last achieved on 7 April by House Minority Leader Pelosi when the WaPo called her out for her “absurd math on senior citizens losing their meals." Seems Ms. Nancy said: “In one of the bills before us, 6 million seniors are deprived of meals — homebound seniors are deprived of meals." The WaPo pointed out Tons of problems with Pelosi’s statistic not the least of which was only 2.6 million seniors receive meals. Seems the meal program (cost ~$818M/year) is managed by the Administration on Aging (AOA), an arm of Health and Human Services and The House bill only cut $65M from the entire HHS $2.4B agency budget.

When the Washington Post awards a Liberal Democrat Four Pinocchios, they must be a World Class, can’t hide it, stand out in a crowd, No denying it -- LIAR – of the first water! Such must be the case for that “Favorite Son” (I mean daughter) of the great State of California. Read the entire article for yourself here but too bad the WaPo Pinocchio meter pegs out at four because I suspect Ms. Nancy would have gotten five if the scale went that high 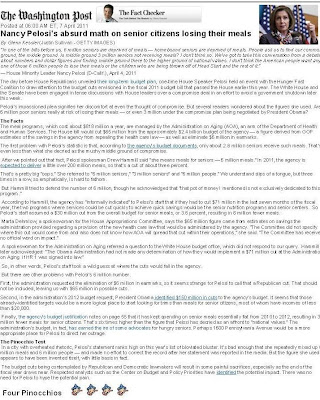 How Does Rick Santorum Really Feel About Soldiers?

As an Old Soldier, I always look behind the scenes to see what people do that affects the Military rather than their “public pronouncements” when I want to know their true feelings about us. This is something I intend to do here in my Blog for the 2012 Presidential contenders as they make their announcements and the first one I want to examine is former Pennsylvania Republican Senator Rick Santorum. Rick recently announced his intentions to run for the Republican nomination.

Although Rick has never donned a uniform in defense of his nation, while in both the House and Senate he supported every military intervention that came down the pike which clearly marks him as a consummate “chicken hawk.” Always ready to send your kids into harms way but not himself or anyone related to him.

Probably the best example of Rick looking out for Soldiers happened back in 1998 when he (and Ted Kennedy) tried to screw disabled and disadvantaged retired enlisted service members by trying to sneak a little-noticed amendment into an unrelated bill requiring the Old Soldiers' and Airmen's Home to sell some of its property to the Catholic University of America and only to Catholic University. In other words, there would be no free market bidding. True Kennedy was the senior partner and member of the Armed Services Committee at the time so was "leader" of this "screwing team" but Santorum was his enthusiastic partner in crime.

The Old Soldiers' Home, as it is called, is where enlisted members can retire and get care if they have no other options and it is funded by a small monthly deduction from enlisted pay. The Department of Defense and Congress have refused to raise the deduction amount but the demand has remained steady thus resulting in a large budget deficit.

The Home rests on many undeveloped acres in Washington, DC, so it was decided that it ought to sell some of its property to the highest bidder, in order to raise funds to continue its worthy work. Its Catholic University neighbor had its own designs on the property but did not feel like paying market price so they approached Santorum and Kennedy who eagerly slipped in the amendment forcing the Home to sell to the university at a price about one-third of the appraised value.

Retired soldiers were outraged when they learned what had happened so held a press conference. Once “outted,” neither Santorum nor Kennedy could defended their attempt to screw Old Soldiers to get Catholic University a steal so they were forced to amend the law.

The right result would have been to open the bidding to everyone and to let the Home take the best offer. Instead, Rick forced a bidding process where Catholic University was given the right of first refusal on any "high" bid which seriously depressed the bidding. In the end, Rick, Ted and Catholic University still screwed the Old Soldiers but not nearly as badly as they wanted to!

If Rick were to ever be elected President, which I must admit is highly unlikely; I expect the Military could look forward to this same type of questionable treatment. This is one Old Soldier that hopes that never happens.
Posted by A_COL at 11:00 AM No comments:

The White House Situation Room – The Picture Seen Round the World 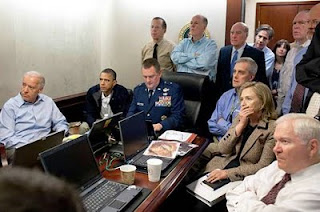 (Photo by Pete Souza / White House; Photo has been altered to obscure a classified document)

Believe it was General Norman Schwarzkopf, the First Gulf War Coalition Commander who was heavily decorated for heroism during Vietnam with a CIB and three Silver Star medals, who put it best when he said: “It doesn’t take courage to order men into combat, it takes courage to go into combat yourself.”

That’s why it’s kind of galling to see pictures of guys like Joe "5-Deferment" Biden sitting around the White House Situation Room watching Navy SEALs take down Osama bin Laden. Of course Joe demonstrated his Military Expertise by the way he skillfully avoided any brush with armed conflict during his youth when he successfully dodged the draft and Vietnam. To be fair, Biden was in good company with others like Dick Cheney, Bill Clinton, Newt Gingrich, Mitt Romney, White House Chief of Staff Bill Daley, Jim Clyburn and most of the other leaders of both parties. To avoid serving these guys did everything short of maiming themselves which none had the guts to do. By comparison, they make "W" look like a war hero! For the record, Bush flying antique Air National Guard Convair F-102s was probably in more danger than I was during my extended CIB-earning tour in Vietnam!

With the departure of National Security Advisor General James Jones last year, NO ONE in the West Wing has ever donned a uniform in defense of this nation which makes Obama's truly a "Vet-less Administration." No one on the National Security Council has ever served in the Military.
Posted by A_COL at 10:10 AM No comments: