Dispelling Some Myths About Women in Combat

Despite all the brouhaha over the 9 Feb 12 Pentagon announcement opening about 14,000 combat related positions to women, in reality this is a technicality that will actually result in absolutely NO change in how many women are exposed to the dangers of combat – which if you examine the combat statistics is still very little. Most of the positions being opened are in maintenance and intelligence units supporting combat formations and these women are already serving “with” but just not “in” these units. Now instead of been “attached” to these units they will be “assigned” to them. A distinction without a difference. Women will remain barred from direct combat units – Infantry, Combat Engineers, Artillery, Special Forces, and Armor.

So how dangerous has it been for “women in combat?” In the past 10+ years of US combat operations in Afghanistan there have been (as of 19 Feb 12) 1896 causalities of which 1506 have been due to hostilities. Women accounted for 31 of the total with 20 of them attributed to hostile action, mostly IEDs. This means women have accounted for about 1½% of the causalities. Certainly much higher than the Vietnam experience where 104 women were among the 51,585 killed during the real 5 years of heavy combat (1966-70) or about .2% of the causalities but still not a significant portion of the losses.

One final myth that needs some “qualification” is the common one that recently appeared in the Washington Post: “Israeli women … serve in the military — indeed, in combat roles denied to women in the U.S. military.” That needs to be put into context because people are already quoting it as a reason to open US Combat formations to women. In 2000 the IDF opened Infantry up to women by forming the Caracal Battalion which is 70% female/30% male with mixed Jews and Arabs. The Battalion is part of the 512th "Sagi" Brigade which is a Territorial Brigade assigned to the relatively quite western sector of the Southern Territorial Command. It is the IDF's ONLY "women in combat experiment."

With as relatively good as the IDF may be, in comparison to the US Military it shouldn’t even be mentioned in the same breath. Hence, one should not be impressed by a second rate army’s token use of females in “a quasi-combat unit” nor should one try to extrapolate their experience to US combat formations.

Every American has the right to have an opinion about “Women in Combat” but to have an “informed opinion” they should at least read the Feb 2012 “DOD Report to Congress: Review of Laws, Policies and Regulations Restricting the Service of Female Members in the U.S. Armed Forces” Then at least they might have a better understanding of the issues and the impacts of such a decision.
Posted by A_COL at 11:47 AM No comments:

Labels: myths about women in combat, Women in Combat

I would invite anyone that’s interested in knowing what the Washington Post Fact Checker actually said unedited to enlarge the below graphic and read it for yourself but here is my take on the subject,

Here are two quotes from recent Presidential “campaign speeches” where it is obvious that President Obama is accusing Republicans in general and Mitt Romney in particular of advocating to let the U.S. Auto Industry go under last year. Thankfully, the Fact Checker debunks that lie in his 3 February 12 article.

“It’s good to remember that the fact that there were some folks who were willing to let this industry die. Because of folks coming together, we are now back in a place where we can compete with any car company in the world.”
--President Obama, at the Washington Auto Show, Jan. 31, 2012

“On the day I took office, our auto industry was on the verge of collapse. Some even said we should let it die. With a million jobs at stake, I refused to let that happen.”
--Obama, in the State of the Union address, Jan. 24, 2011

The Fact Checker pointed this is “an unfortunate, and remarkably ungracious, tendency to distort the record” of George W. Bush on the auto industry rescue and that it was Bush that loaned billions of dollars to GM and Chrysler so that Obama was not confronted with an auto-industry collapse in his first days in office. He also says the President has a fondness for using rhetorical straw men in his speeches, wondered: Did anyone really say the auto industry should simply die?

The Facts
Reporters assume that the president’s words are aimed at his likely GOP rival former Gov Mitt Romney who penned OpEd titled “Let Detroit Go Bankrupt.” The basic thrust of the article was that the companies should go through a managed bankruptcy, mainly to shed labor costs, rather than just get a “bailout check” but he certainly did not say that the industry should die. In the end Obama did exactly what Romney advocated, he arranged for both GM and Chrysler to go through the bankruptcy process.

When asked by the Fact Checker about Obama’s baseless utterances, the White House did not provide any quotes from Romney thus trying to give the appearance Romney was not Obama’s intended target. Instead, they provided a seven-page document highlighting 30 Republican lawmaker statements criticizing both the Bush and Obama efforts to stabilize the auto industry but virtually all of these comments were questions of tactics, such as not enough pressure had been put on auto industry unions. It is clear that Republicans were pressing for an immediate auto industry bankruptcy to break the United Auto Workers.

One of the quotes supplied by the administration was made by Sen. Bob Corker (R-TN), who was central to crafting the conditions for the Bush loan. Corker said on 31 March 2009, that “Chrysler was toast” but top Obama administration officials were split 4-4 at the time on whether it made sense to keep supporting Chrysler. Only days before Crocker made his statement Austan Goolsbee (one of Obama’s top economic advisors) appealed to Obama to let Chrysler die on the grounds that a Chrysler demise would enhance GM’s chances of survival but Obama rejected his advice. So it appears Obama unfairly criticizes Republicans for echoing sentiments expressed within his administration and should be crediting Bush for laying the groundwork for his eventual intervention.

The Pinocchio Test
So what is the WaPo bottom line, the evidence for Obama suggesting that GOP lawmakers were willing to let the auto industry collapse is not very strong. The quotes the Fact Checker received from Obama and others they researched were mostly questions of tactics. As the administration’s internal debate suggests, the answers were not clear and certainly several top Obama officials thought at least one car company should die.

Building on difficult decisions by George W. Bush, Obama made some tough calls and a good chunk of billions of taxpayer dollars may never be recovered but both GM and Chrysler are still in business so there is no need for such rhetorical overreach by the Obama Administration.

The WaPo only awarded Obama 2 Pinocchios so this is just a mini-Whopper and definitely not up to his usual 3 or 4 Whopper standard. 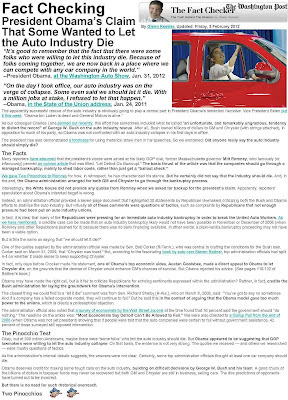