“What we also have to recognize is, is that our homicide rates are so much higher than other industrialized countries. I mean by like a mile. And most of that is attributable to the easy, ready availability of firearms, particularly handguns.”

“People just say well, we should have firearms in kindergarten and we should have machine guns in bars. You think I’m exaggerating — I mean, you look at some of these laws that come up.” 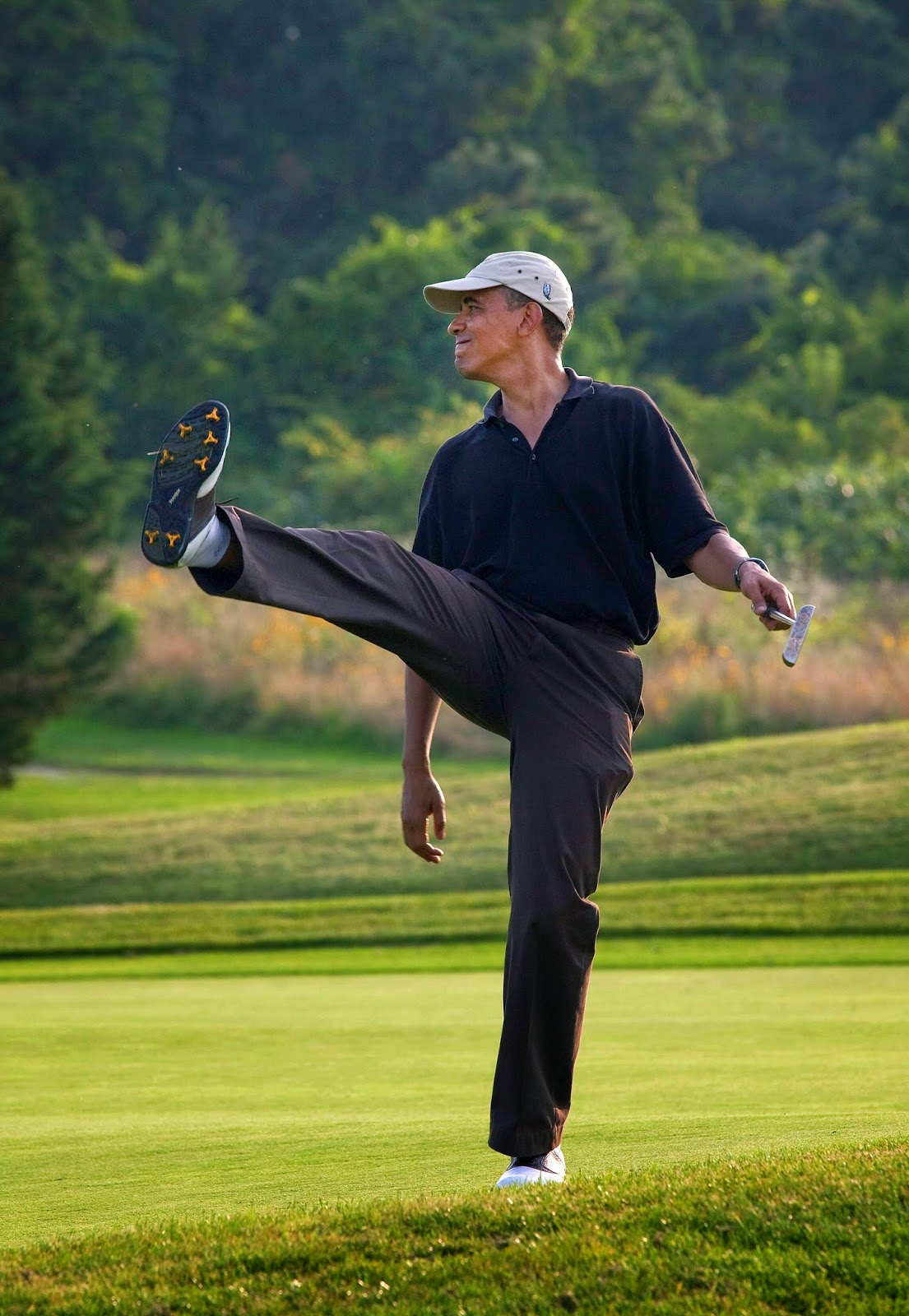 These claims by Obama were so outlandish that Ripley wouldn’t have believed them let alone the WaPo Fact Checker so it sent Glenn Kessler in search of the truth.  Here is how Glenn dissected and evaluated each of the Prez’s assertions.

When Glenn called the White House out on this one and especially the “by like a mile” phrase, Obama’s minions tried to walk it back a bit but Glenn held them to exactly what the Prez said; he told the students the United States had the highest homicide rate among the nations of the industrialized world which is both factually incorrect and a flat out lie.  These statements were made by a person that couldn’t pick the gun out of a line up with golf clubs!

The “industrialized countries” is generally recognized to be the 36 countries the Organization for Economic Cooperation uses for its statistical analysis.  The OECD says the average homicide rate among the 36 countries is 4.1 per 100,000 people.

Brazil tops the list with a homicide rate of 25.5, or six times the average, with Mexico next at 23.4 followed by Russia at 12.8.  Tied for fourth place are Chile and the United States at 5.2 followed closely by Estonia at 4.7.

United States does have an above average rate but the Obama said that U.S. rate was higher “by a mile” when in fact the rate is five times lower than Brazil and four times lower than Mexico.

Appears no one could quite figure out what the Prez was trying to say here in that Glenn could find any place in the U.S where background checks are needed to buy vegetables. Even the White House couldn’t provide an explanation for Obama’s “vegetables and guns” comment?

“People just say well, we should have firearms in kindergarten and we should have machine guns in bars… You think I’m exaggerating — I mean, you look at some of these laws that come up.”

Some states may allow firearms to be carried into bars and restaurants (unless the owner objected), but NO PLACE allows machine guns in bars. As a matter of fact, it takes a Federal license to even own a machine gun!

As for guns in schools, particularly college campuses, Florida is considering a proposal that does not specifically address kindergartens but would allow some school personnel to carry guns, provided it is approved by school administrators and would be limited to former or current law enforcement or military personnel but they must receive training at law-enforcement academies.  The Law Center to Prevent Gun Violence, which supports gun restrictions, says “the vast majority of states – 48 of them – and the District of Columbia generally prohibit any person from carrying a firearm onto or possessing a firearm on school property, within safe school or gun-free school zones, on school-provided transportation, or at certain school-sponsored events.” Most states also require the expulsion of students who bring firearms onto school property, the groups says.

Appears to make this statement, Obama had been drinking in bars rather than carrying a machine gun into one

The president was “playing fast furious” I mean “fast and and loose” with the truth when he was talking to this group of college students no less. There is NO excuse for the claim that in some neighborhoods, it is easier to buy a gun than vegetable — or to say he’s “not exaggerating” when he claims that some people have proposed laws that would allow machine guns in bars … unless he, as President, intends to introduce legislation to make machine gun ownership in the US.

As for the US ranking on homicides among the industrialized nations, we might be slightly above average but to claimed the United States had rates that were higher “by like a mile” is so totally Bogus but typical Obama.  Tell a lie often enough and people might start to believe it!

The gun debate is serious enough that it should not be poisoned by exaggerated claims and faux statistics that are so outlandish that the students should have given the president a “strolling ovation” as they walked out on his speech.  The WaPo’s Glenn Kessler only awarded the Pres Three Pinocchios for this BS presentation but I believe he shortchanged him.  This one should certainly deserve the coveted Four!  If you want to see exactly what Glenn said, I’ll include his article uncut and uncensored below.

Republican Senators’ Ill-conceived Letter to Iran on Negotiation to Curtail Their Nuclear Program - Have We Begun a Destructive Game of “You Step on My Prerogatives and I’ll Step on Yours” Between President Obama and the Republican led Congress?


On 10 March, 47 Republican US Senators sent a letter to Iran that has the potential to seriously complicate the Obama Administration negotiations and possibly even kill any potential agreement to curtail Iran’s nuclear program.  In my view this was a terrible and immature overreaction to President Obama’s recent arguably illegal and definitely improper actions that impinge on Congressional prerogatives.  Have we begun a destructive game of “you step on my prerogative and I’ll step on yours” between Obama and the Republican led Congress?

One of the most egregious examples of the President’s impingement on Congressional prerogatives was his using his “pen and phone” to issue his Immigration Executive Order granting amnesty to about 6 million illegal aliens.  This gives illegal aliens social security numbers that will enable them to compete for jobs with legal Americans and even raid the US Treasury for $15,000 each by filing for three years worth of tax refunds for years they worked “off the books” and didn’t even pay taxes!

Like in football when it’s always the player that reacts to an illegal hit that draws the penalty, for some reason Republicans always get the blame when they react to Democrat provocations.  I suspect a great deal of the reason the Republicans are normally blamed is how the stories are reported by the naturally left-leaning mainstream press.  Examples:

Obama impinges on Republican prerogatives by issuing his “Amnesty for Illegal Aliens” and Republicans react by impinging on Executive prerogatives by inviting Israeli Prime Mister Benjamin Netanyahu to address a joint session of Congress and now this letter to Iran.  The Republican lame excuse for sending the letter was to “instruct the Iranians that the President does not have the Constitutional authority to reach a meaningful understanding with them” and that any executive agreement “could be undone or modified by Congress or that a future President could revoke it with a stroke of a pen.”  I seriously doubt Supreme Leader Ali Khamenei needed the Republican’s gratuitous civics lesson on the limits of Presidential power but the Press never made the connection between the Democrat’s provocation and the Republican reaction.  Result: penalty Republicans for “Unsportsman-like Conduct!”

Obama becomes the first presidential candidate in a generation to reject public financing for his 2008 campaign after pledging to accept it and instead accepts unlimited corporate and “fat cat” donations and Republicans get blamed for later out raising Democrats with “fat cats” and for the Supreme Court “Citizens United v. Federal Election Commission” decision.  Result: penalty Republicans for “Unsportsman-like Conduct!”

The Senate Democrats filibuster a motion to even debate the recent Department of Homeland Security (DHS) Appropriations Bill sent over by the House despite “regular order” would have allowed them to offer amendments and send the bill back to conference with the House to hammer out differences before a final vote.  Remember, appropriation bills MUST originate in the House under the Constitution and it was the Senate Democrats that halted “regular order” action on it yet the Liberal press shifted the blame to Republicans.  Result: penalty Republicans for “Unsportsman-like Conduct!”

I could cite several more examples but bottom line, when the Liberal press acts more like NFL Referees than impartial reporters of the facts and have a natural Liberal bent to blame Republicans regardless of whose really at fault, then when they call out an actual foul like this ill-advised letter to Iran, many Republicans just see it as another example of a press overreaction to Republicans reacting to Democrat provocation.  If the mainstream press were more “fair and balanced,” then maybe Republicans would be more apt to take them seriously and react when there is a real “penalty” called on them like this one.

The real question is when will this destructive game of “you step on my prerogative and I’ll step on yours” between Obama and the Republican led Congress end?  I would suggest that a good starting point might be halting what started this latest round of pissing contests, Obama’s Immigration Executive Order.  Even the Washington Post has come out in opposition to that executive order and questioned it legality and a Federal Judge has found sufficient reason to order it stopped until a challenge can be heard in May.  The President should let the Immigration issue play out in the Courts and ultimately I suspect the Supreme Court will decide it.  Unless one of the parties calls a truce, I suspect we will see repeated incidents of destructive behavior by both sides for the remainder of Obama’s term of office.  This could permanently damage the country and set a precedent for future Presidents and Congresses that they can get away with obviating each others prerogatives without limits.
Posted by A_COL at 11:30 AM No comments: