Unfortunately, that leaves out the Washington Post (WaPo) and ALL the Democrat Presidential Candidates!

Passing laws dealing with gun “cosmetics” rather than “ballistic characteristics” is stupid so as soon as I hear a politician or reporter use the terms “assault rifle” or “military style” I immediately dismiss them as clueless. We need a serious discussion of the issues by people that actually know what they’re talking about but all I hear from people that couldn’t pick the AR-15 out in a line up with Nerf guns is we need "common sense gun laws." To help educate these people I have put together this graphic so they can identify the different types of weapons. 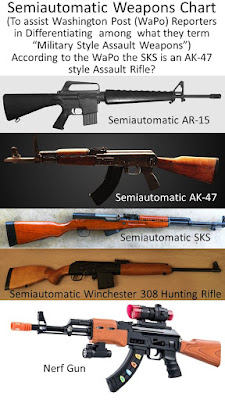 Seems Politicians and reporters that keep demanding gun legislation never seem to be able to suggest many "common sense" Laws and the WaPo is no exception. I’m all in favor of universal background checks, keeping guns out of the hands of convicted felons and people who have received less than honorable discharges from the Military, and “Red Flag” Law. I’m also for limiting magazine size to 10 rounds although a trained shooter can change magazines in a fraction of a second. Unfortunately, most of the mass shootings would not have been prevented by a background check as the shooters didn’t have anything recorded that would have stopped them from legally buying a gun.


How about we start by fixing the major flaw in the Background Checks system by making states report data and require the National Instant Criminal Background Check System (NICS) be checked BEFORE ALL gun sales.The Fix NICS Act of 2017 was supposed to remedy the holes in the background system but it is still deficient because its provisions only “incentivized” states to register people but it is still not mandatory.

Presently over half the States do not populate the NICS with State criminal or mental health information. Unfortunately, the fix may be difficult. Using the same argument California is using to defend their Sanctuary State Laws protecting illegal aliens from ICE Agents, it may be impossible to force States to enter data into the NICS to keep people with disqualifying criminal or mental conditions from purchasing a firearm.

Next, maybe we should be writing laws that address acceptable weapons and ammunition ballistic characteristics rather than using such meaningless terms as “military style” and “assault rifles.” It would probably surprise most anti-gun zealots to learn that if I were to saw the pistol grip and flash suppressor off a semiautomatic AR-15 it would not fit the Federal or any State definition of an “assault rifle” yet the lethality of the weapon would be unchanged.  It’s like passing “cosmetic” laws banning two door cars because they look sporty so people that drive them may be inclined to speed. When NY state passed the SAFE Act shortly after Sandy Hook, it basically outlawed AR-15 style rifles yet within a week manufactures were selling a work around that was the same basic gun missing a couple features like the pistol grip.

I would add the true definition of a Military “Assault Rifle” is “a selective-fire rifle (capability to be adjusted to fire in semi-automatic, burst mode, and/or fully automatic firing mode) that uses an intermediate cartridge and a detachable magazine.”  Hence, Military “Assault Rifles” have been strictly regulated since passage of the National Firearms Act (NFA) of 1934. This federal law regulates fully automatic weapons, suppressors, short-barreled rifles and shotguns and was subsequently modified in 1968 by the Gun Control Act and in 1986 by the Firearm Owners Protection Act.  NFA items are highly regulated and a special license from the Bureau of Alcohol, Tobacco, Firearms, and Explosives (ATF) is required to manufacture, sell, and own any of these items, without exception.

One final piece of educational material for the WaPo, Military Style semi-automatic Assault Rifles are not the major problem as the vast majority of firearm deaths are caused by handguns. Also, in fact Assault Rifles are LESS Lethal than the standard hunting rifle.  The .223 round fired by the AR-15 (the single shot civilian equivalent of the M-4/M16) is less lethal than the .308 Winchester which is the standard round used in hunting rifles.  The .308 is very similar to the military 7.62x51 NATO cartridge fired by the M-14 rifle and M-60 Machine Gun, but the .308 is loaded to higher pressures.  In Vietnam I’ve seen enemies hit with both the .223 (5.56mm) M-16 round and the 7.62 fired by both the M-240/M-60 and the M-14 and given the choice I’d much prefer to be hit by the smaller and less powerful .223 every time.  Seems those who have never served don’t know this.

As for those that advocate requiring insurance to exercise their Constitutionally protected Second Amendment right to possess firearms, to be consistent they must also support requiring insurance to exercise their First Amendment right of “freedom of speech.” Don’t they also need to be “Protected” in the event they or a fellow citizen were to liable or slander them? Maybe Congress should just pass a companion act to Obamacare requiring every American to carry personal liability insurance to cover every possible transgression, real or perceived. Just taking this ridiculous "gun insurance" proposal to its illogical conclusion.

In conclusion, I support the US Constitution and the Second Amendment that guarantees every citizen the right to own a firearm for self-protection. Ask any citizen who has been directed by law enforcement to “shelter in place” because a crazed killer was loose in their neighborhood and if they answer honestly, they will confess they wished they had had a firearm. But I also agree there are some limits such as the ban on automatic weapons and high capacity magazines that should be enacted but law abiding citizens should never be deprived of their Constitutionally protected right to possess a fire arm for self-protection; otherwise, only criminals that don’t abide by laws anyway will have guns and the rest of us will be classified as “their victims.”

Serious fixes demand serious discussion by serious people. Unfortunately, knowledgeable serious people are few and far between and certainly don’t include anyone at the Washington Post, New York Times or most of the media and very few in the U.S. Congress or the Virginia Legislature..
Posted by A_COL at 9:31 AM 1 comment: