Memorial Day 2012 - Honor ALL Vets But Reserve a Special Place for the WWII Heroes!

As a Vietnam combat Vet who spent 30 years in the Army (and was in Afghanistan as a civilian last year), I honor ALL Veterans but this Memorial Day 2012 I will especially remember those from the wars where we still have living Veterans and especially from World War II.

Between Vietnam and our present wars, our military also saw combat in Grenada (total lost from all causes = 19), Panama (24), The Gulf War (293).

To me, the real heroes of WWII were the men of the 8th Air Force (one of 16 numbered Air Forces in the War). The 8th AF sustained more than 27,000 killed; that’s more than the entire Marine Corps (24,500) lost in that war. I will never understand how men had the courage to board those bombers day after day knowing they would often sustain 40-50% casualties on a single mission.

Honor ALL Veterans but reserve a special place for the Heroes from World War II!
Posted by A_COL at 7:13 PM No comments:

How Do You Cure the Common Cold? Turn It into Pneumonia! - How Does Obama Lower Unemployment? Shift People from the Labor Force to Welfare!

How do you cure the common cold? Turn it into pneumonia! How does Obama lower unemployment? Shift people from the labor force to unemployment to welfare! Obama is just now touting that unemployment fell to 8.1% this week, the lowest since January 2009. Unfortunately the rate dropped because fewer people are searching for jobs; unemployment only includes those seeking work. If the same percentage of adults were in the workforce today as when Obama took office, the unemployment rate would be 11.1% and when Bush 43 took office it would be 13.1!

On Friday/4 May 2012 the Bureau of Labor Statistics released the April numbers and it showed the US economy added a paltry 115,000 jobs – not even enough to keep up with what would normally enter the work force each month. Because the “labor force participation rate” (tracks the number of working-age Americans hold or seeking jobs) dropped by 342,000 in April, in Obama’s alternate universe that was enough to drive unemployment down?

This phenomena is termed Obamanomics - Reducing unemployment by having 3 million unemployed workers just call it quits! Perversely, under Obamanomics a poor economy is “good” for reelection because if the economy were to improve, more workers might start looking for work and the unemployment rate would go up.

Of course the added benefit to Obama under Obamanomics is that about 41% of the unemployed have been out of work for more than 27 weeks and the longer a worker is jobless the harder it is to return to the labor force – lose skills, become lazy, enjoy daytime TV. These folks move from being unemployed to unemployable so become totally dependent on Government assistance. This is the voter demographic that most appeals to Obama - those totally dependent on the “Nanny State.” 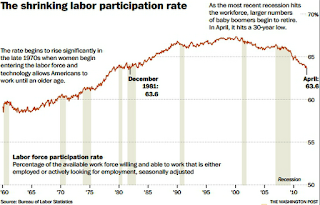 With only 50% of Americans now paying Federal income tax, we've about reached the tipping point where we've got more "people in the wagon than pulling the wagon." Obama's solution to ask China to help pull the wagon by lending us money as we run up larger and larger deficits is a short term fix but I can't understand how young people are falling for this dodge; they are the people that will someday be saddled with this horrendous debt. A child born today in America enters this World with a $50,000 debt! When today’s youth reach middle age and are strapped with high taxes to pay off this debt they will look back to this time when they were cheering at Obama reelection events and wonder "what was I thinking!"
Posted by A_COL at 9:02 AM No comments: