Back on 21 January 2011, on the fiftieth anniversary of his inauguration, I published my Blog article: Remembering President Kennedy - 50 Years Later! where I praised him for his courage to stand up to Communist aggression in Vietnam which in retrospect arguably saved all of Southeast Asia from falling under Communist domination. Here on the eve of the fiftieth anniversary of his assassination I feel compelled to update and repost that article. 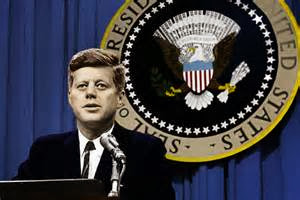 As a retired Army Colonel who was drafted into Secretary McNamara’s Army, commissioned out of OCS and had the privilege of serving an extended CIB earning Vietnam tour arriving as a new second lieutenant and coming home a seasoned captain, I don’t believe President Kennedy is given sufficient credit for his committed bi-partisan, anti-communist foreign policy and his principled defense of South Vietnam. By sending in U.S. Combat Forces and actually creating the Military Assistance Command Vietnam (MACV) on 8 Feb 1962 (as everyone that fought in Vietnam knows, MACV was the US Command that prosecuted the war right up until the end), President Kennedy provided most of the rest of Southeast Asia, and particularly Thailand, the “breathing room” to resist total Communist dominance.

President Kennedy was totally committed to stopping communist expansion and knew not acting decisively in Vietnam by committing US troops would fatally damage U.S. credibility with our allies. As Kennedy so eloquently stated "Now we have a problem in making our power credible... and Vietnam looks like the place.” He went on to reaffirmed his commitment to defend South Vietnam in his 11 May National Security Action Memorandum 52, which became known as "The Presidential Program for Vietnam." Its opening statement reads: “U.S. objectives and concept of operations [are] to prevent communist domination of South Vietnam; to create in that country a viable and increasingly democratic society, and to initiate, on an accelerated basis, a series of mutually supporting actions of a military, political, economic, psychological, and covert character designed to achieve this objective.”

Although initially totally supportive of the Vietnam Catholic minority administration of President Ngô Đình Diệm, the Kennedy administration grew increasingly frustrated with Diệm because his crackdown against protesting Buddhist monks that sparked a Buddhist Revolt where several monks committed self-immolation covered by the world press. Hence, on 1 Nov 1963, with the tacit approval of the Kennedy administration, Vietnamese military officers launch a coup d'état against Diem and on the next day he was assassinated. President Kennedy knew to be successful there needed to be a change in Vietnamese leadership and he was not afraid to make it. By the time President Kennedy was himself assassinated he had established the MACV Command and had 25,000 troops in country with plans for a significant escalation. Although President Johnson presided over the troop increases, he was following the Kennedy blueprint so President Kennedy is due the lion’s share of the credit for saving most of Southeast Asia from Communist domination.

As a student of the Vietnam War who strongly believes holding the line there until the mid 1970s (ground troops left in 1972 and Congress withdrew support allowing the South Vietnamese Government to fall in 1975) actually stemmed the tide of Communist aggression in Southeast Asia, I believe the contributions of President are often overlooked.

Much of the reason for President Kennedy not getting the credit he deserves is due to the works of some misguided liberal Kennedy biographers, most notably Theodore White and Ted Sorensen (neither of whom ever served in the Military although of prime draft aged during US conflicts). In their attempts to revise history after much of their Democrat liberal base turned against the Vietnam War, and without any basis for their assertion, they promulgate the false myth that if Kennedy had lived he would have withdrawn U.S. Forces in his second term and spared the country the agony of Vietnam.

Although no one could ever knows for sure Kennedy’s intentions for Vietnam during a second term, the best indication of his thinking on the subject was provided by the person in the best position to know, his brother Robert. In an interview some five months after JFK’s death, Robert Kennedy (RFK) told an oral-history interviewer that his brother “had a strong, overwhelming reason for being in Vietnam and that we should win the war in Vietnam.” Here was part of that exchange:

Interviewer: “There was never any consideration given to pulling out?”

President Kennedy himself telegraphed his Vietnam intentions even more strongly during his 12 September 1963 press conferences, just two months before his assassination. Responding to a question about Vietnam, he said his policy was: “to win the war there ….That is why some 25,000 Americans have traveled 10,000 miles to participate in that struggle…we are not there to see a war lost.”

From the beginning President Kennedy’s commitment to Vietnam never waivered and remained consistent. Even way back in a 1956 speech Senator Kennedy called Vietnam “the keystone to the arch, the finger in the dike,” adding: “This is our offspring — we cannot abandon it.”

The fact that President Kennedy established MACV and introduced combat troops into South Vietnam in sizable numbers providing the “breathing room” that kept most of Southeast Asia free should be a proud part of the proud Kennedy legacy and I am honored to have been one who was inspired to answer the President’s call “to ask not what your country can do for you but what you can do for your country.”
Posted by A_COL at 10:17 AM No comments: