It’s that time of the year again when the Old Colonel gets to weigh in on the Academy Awards and I truly appreciate the Academy of Motion Picture Arts and Sciences telling me what the best motion pictures of the year were but in the ONLY category that really counts – MONEY MADE – it appears the American and International audiences have made different decisions.  When it comes to picking movies, I always "trust the mob" so here is how the movie going and paying public ranked this year’s movies as of 5 March 2018, the day after the Academy gave the Best Picture award to The Shape of Water! 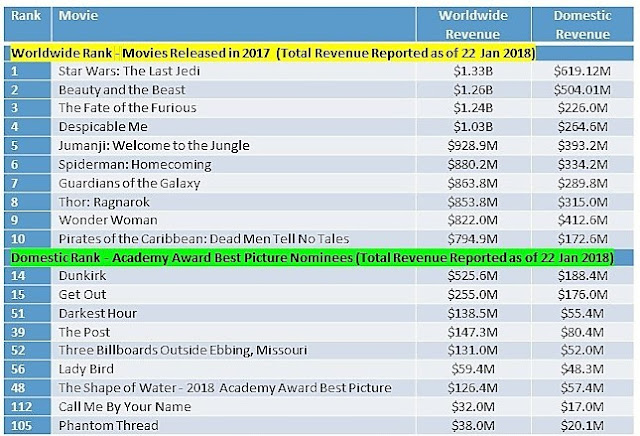 Notice NONE of the nine nominated pictures is even among the ten top money maker of the past year, or even close for that matter. According to the Mob, the Best Picture of 2017 was Star Wars: The Last Jedi taking in $1.33B Worldwide which was more than ten times what the winner, The Shape of Water, made and over two and a half times what the top nominee, Dunkirk, took in.  Star Wars made 35 times more than Phantom Thread earned.  Although some of the nominees might earn more between now and the end of their theater run, none including Dunkirk will crack the Top Ten earnings list where the poorest performer, Jumanji: Welcome to the Jungle, earned $794.9M.

One thing I'm confident of is that the producers of The Shape of Water would gladly trade their Oscar for the $1.33B Star Wars: The Last Jedi earned.
Posted by A_COL at 11:24 AM No comments: