Obama Tells Another Whopper on Univision – Tried to Blame Bush for Fast and Furious! Then Pays Off Univision for NOT Challenging Him on the Lie by Appointing Univision Owner’s Wife U.S. Representative to the UN

Obama Scores Three Pinocchio from the Washington Post for lying at Spanish language TV Interview "I think it’s important for us to understand that the Fast and Furious program … begun under the previous administration… . the people who did initiate this were held accountable.”
— President Obama during Univision interview, 20 Sep 2012

On Thursday/20 September President Obama appeared on the Spanish-language television network Univision and host Jorge Ramos asked Obama if U.S. Attorney General Eric Holder should be fired over Fast and Furious – his administration’s “gun-walking” operation that allowed firearms to be transferred to Mexican arms traffickers and two of those guns were used to kill US Border Patrol agent Brian Terry. In typical Obama fashion Obama responded with the bold faced lie that the previous administration initiated Fast and Furious and that Holder shut the program down after he found out about it and even worse, in typical fawning press fashion, Ramos didn’t call him out on his lie. Seems there is also a Spanish version of the “Lame-Stream Press” and both are too busy attacking everything Romney says to bother to check any of Obama’s utterances, no matter how false, outlandish, ridiculous or improbable.

Then a few days after the interview when it was revealed Obama had appointed Cheryl Saban, wife of Univision owner Haim Saban, U.S. Representative to the United Nations everything became clear. The “Fix was in” before the interview even started so it should have been billed a campaign rally and not a news interview. (See: Obama-Appoins-Univision-Wife) It’s obvious Obama must not respect Latino viewers because he must believe they are so naive as to believe anything he says, no matter how improbable as evidenced by the fact he also told them during this same interview that the 11 September attack on the U.S. Consulate in Benghazi, Libya that killed U.S. Ambassador Chris Stevens, diplomat Sean Smith and two former Navy SEALs was an outgrowth of the Middle East demonstrations over that American-made Internet video insulting the Islamic prophet Muhammad. He made this ridiculous statement despite the fact Jay Carney, his White House Press Secretary, had already announced earlier in the day during his daily press corps briefing that it was a well planned and coordinated sophisticated terrorist operation and by that time even Secretary of State Hillary Rodham Clinton was calling it a "terrorist attack."

The fact that the attack was carried out by heavily armed extremists using military-style tactics and that they had also steered Americans toward a waiting ambush as they were being rescued would alert anyone with even a passing knowledge of military tactics that this was not a spontaneous demonstration. The Terrorists attacked with heavy weapons including RPGs and broke off into teams to block certain roads away from the compound as the Americans moved to an annex to await relief. Once there, that building came under coordinate mortar fire with projectiles landing directly on the roof of the annex indicating a sophisticated battlefield strategy by experienced fighters with a well-developed assault plan.

But back to Fast and Furious. Last week following his 19-month investigation, the U.S. Justice Department's own Inspector General released his 471-page report and he reported that on 26 October 2009, a teleconference was held at the Department of Justice in Washington, D.C. with Deputy Attorney General David W. Ogden, Assistant Attorney General Lanny A. Breuer, ATF Director Kenneth E. Melson, DEA Administrator Michele Leonhart, Director of the Federal Bureau of Investigation Robert Mueller and the top federal prosecutors in the Southwestern border states where they cooked up this hare brained scheme and Operation Fast and Furious began on October 31, 2009 – some nine (9) months into Obama’s term of office.

In his report, the IG recommended 14 employees, including Assistant Attorney General Lanny Breuer, for discipline in connection with this botched "Operation Fast and Furious" so how did Holder hold his deputy “accountable?” He gave him a complete pass and said he would take no action. Now that’s real “discipline and accountability” and it thoroughly outraged the slain agent’s family.

Obama was not telling the truth and “the Fast and Furious program,” unquestionably started during his term as president.

That the operation was DEFINITELY not “begun under the previous administration” and Obama was probably trying to wash his hands of any accountability for a program that was obviously launched on his watch and that allowed 2,000 powerful firearms to end up on U.S. and Mexican streets.

The Post said “we can’t let politicians get away with this sort of egregious factual mistake.” The Fact Checker also noted that this had become an Obama pattern and he had earlier tried to shirk his responsibility for politically hot failures in the past including saying his administration wasn’t at fault for the $535 million federal loan that went to the now-bankrupt solar-panel manufacturer Solyndra when in fact, it was ALL his fault.

The Post awarded Obama THREE PINOCCHIOS for his Fast and Furious lies and noted his factual error that the previous administration was responsible for gun walking and Operation Fast and Furious was Absolutely a LIE! But don’t take my word for it; if you want to see EXACTLY what the Factchecker said, either blow up and read the below graphic or read the actually article at this link: Obama_Tells_Another_Whoppe_on_Univision 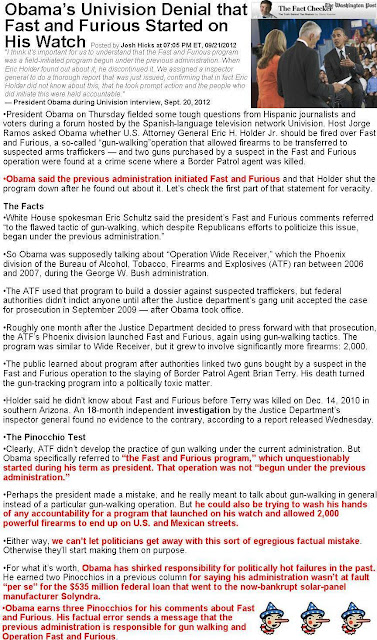 How do you cure the common cold? Turn it into pneumonia! How does Obama lower unemployment? Shift people from the labor force to unemployment and welfare!

This morning the Government released the August Employment Numbers and here’s my analysis of them:

The Good News: Unemployment fell to 8.1% this week.

The Bad News: Unemployment fell because 368,000 people gave up looking for work so are no longer searching for jobs; the unemployment rate only counts those seeking work. At this rate, the Unemployment Rate and the Labor Force Participation Rate would converge at ZERO if there were to be an Obama second term.

More Bad News: The proportion of the population working or looking for work fell to 63.5 percent; the lowest level in 31 years for the Labor Force Participation Rate.

More Bad News: Hourly pay fell, manufacturers cut the most jobs in two years and the number of people in the work force dropped to its lowest level in 31 years.

More Bad News: The average work week in July and August has fallen to just 34.4 hours and the number of temporary jobs fell for the first time in 5 months.

More Bad News: Many of the jobs were in lower-paying industries such as retail, which added 6,100 jobs, and hotels, restaurants and other leisure industries, which gained 34,000. Higher-paying manufacturing jobs fell by 15,000, the most in two years.

More GOOD News: If we can hold on until 20 January 2013, Help is on the way in the form of a Romney-Ryan pro-growth, business friendly Administration.

For a full discussion of Obama's Job performance, check out my earlier old-soldier-colonel.blogspot article: How do you cure the common cold? Turn it into pneumonia! How does Obama lower unemployment? Shift people from the labor force to unemployment and welfare!