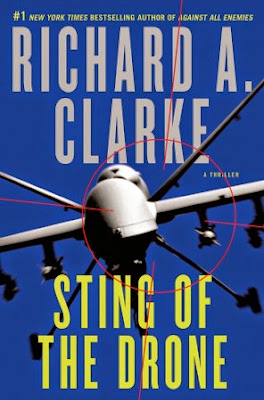 In the Sunday, 25 May 2014 Washington Post I had the “pleasure” of reading the book review of Richard Clarke’s new book “Sting of the Drones” reviewed by Dina Temple-Raston, NPR’s counter-terrorism correspondent who cites as her bona fides: “spending decades covering terrorism” (http://www.washingtonpost.com/opinions/book-review-sting-of-the-drone-by-richard-a-clarke/2014/05/23/83302ec8-d487-11e3-95d3-3bcd77cd4e11_story.html).

I believe this passage in the review tells you all you need to know about Dina and NPR’s knowledge of drones, counter-terrorism, and National Security in general: “the fictitious Creech Air Force base outside Las Vegas, where the drone pilots are based ….” This just reinforces the fact that using “NPR” and “Counter-terrorism expert” in the same sentence yields an oxymoron. I suspect the 3000+ service members stationed at the 2300 acre Creech AFB in Indian Springs, NV, would be surprised to learn they work at a “fictitious” base.

The fact that Dina doesn’t know about the existence of the base that hosts the 432d Air Expeditionary Wing, comprised of 2 groups with 6 Operational Squadrons and 3 Maintenance Squadrons of Unmanned Areal Vehicles (or drones) that fly both MQ-9 Reapers and MQ-1 Predators, is breathtaking. Not only is the base the home of the Joint Unmanned Aerial Systems Center of Excellence but it’s the location where UAV pilots and aircrews are trained and is even the location from which pilots coordination, direct and conduct combat sorties halfway across the world.

So much for establishing Dina’s (and NPR's) “terrorism bona fides!”
Posted by A_COL at 9:22 AM 1 comment:

This morning the Washington Post Fact-Checker Glenn Kessler busted President Obama (again) for playing fast and loose with the truth for his “false facts on Republicans’ filibusters.” This is the statement that earned Obama Glenn’s highest award for lying, the coveted Four Pinocchios:

“Here’s what’s more disconcerting. Their [Republicans’] willingness to say ‘no’ to everything — the fact that since 2007 they have filibustered about 500 pieces of legislation that would help the middle class just gives you a sense of how opposed they are to any progress — has actually led to an increase in cynicism and discouragement among the people who were counting on us to fight for them.”

This past week the President was in Los Angeles addressing a fund raiser of the only collection of idiots dumb enough to believe his ravings, the Democratic Congressional Campaign Committee, where he made this claim so ridiculous that it had even some of the Hollywood crowd attending this dinner chocking on their rubber chicken: “Senate Republicans have filibustered 500 pieces of legislation that would help the middle class.”

Even the Washington Post (WaPo), certainly no bastion of Conservative thinking, couldn’t believe the president’s claim made any sense, no matter how he worked the numbers.

The WaPo went on to lay out these facts:

For the slow witted Democrats they began by providing the universally accepted definitions of filibuster and cloture: “A filibuster is an extended debate that delays a vote on a pending matter, while cloture is the device to end debate. Filibusters are used by opponents of a nominee or legislation, while cloture is filed by supporters.”

The WaPo pointed out that since 2007 (while Senator Obama was still a Senator I might add), there have been 527 cloture motions filed which is probably where Obama got his “about 500” figure but most of those cloture motions were dropped, never voted on, or in senatorial vernacular “vitiated.” To support his lie, Obama counted every cloture motion as a filibuster but in fact since 2007, there have only been just 133 successful filibusters where a final vote could not take place. Even this 133 number is misleading because Obama referred to “legislation” in his 7 May statement while most of these cloture motions involved judicial and executive branch nominations. In the 113th Congress, 83 of the 136 cloture motions so far have involved nominations, not legislation. Even Obama would be hard pressed to explain how any of these confirmation cloture votes were aimed at “legislation that would help the middle class.”

Another major flaw in Obama’s “500 pieces of legislation” calculation is the same bill can be subject to as many as three cloture motions, further inflating his numbers. On a single bill there could be cloture on the bill, cloture on a substitute bill (when a lawmakers is using an unrelated bill as a vehicle for passage), and cloture on the underlying bill -- all these votes taking place close together – but for Obama that would be three filibusters. So far in the 113th Congress, 36 pieces of legislation were subject to a cloture motion — and 12 actually were filibustered. That isn’t even close to the 136 that Obama counts to get to his 500 number.

Obama also includes at least a half-dozen times when Democrats used a filibuster to block Republican initiatives. Further, Obama reached back to 2007 in making his claim which includes two years when he was still a senator and on eight occasions he voted against ending debate and extending the filibuster, the very thing he’s condemning Republicans for doing.

Thankfully, Obama is not counting as filibusters against Republicans the favorite tactic of Senate Majority Leader Harry M. Reid’s (D-NV.) where he extracts a unanimous consent agreement of a 60-vote threshold for passage to even allow a Republican-backed piece of legislation to come up for a vote. The WaPo found this to be the Democrats equivalent of a threatened filibuster and just last week Reid demanded a 60-vote threshold agreement to even allow a vote to come up on an energy-efficiency bill that included approval of the XL Pipeline. This negotiated 60-vote threshold is the Democrats method of avoiding the lengthy mechanics of the cloture process, but still thwarts a simple majority rule so is the equivalent of a filibuster.

When the WaPo confronted Obama’s White House about their “filibuster lie,” they couldn’t defend it so declined to provide an on-the-record response.

The WaPo found Obama’s statement to be ridiculous on just about every level. The WaPo noted he had served in the Senate so should be familiar with its terms and procedures and should know the definitions of “filibuster,” “cloture” and “legislation.” Hence, he might have been able to make a case that Republicans have blocked about 50 bills he supported but instead contorted the numbers to such an extent that he even blamed Republicans for filibuster votes he made as a senator.

This is what earned President Obama his Four Pinocchios but don’t take my word for it, here is the actual article as it appeared in the WaPo Sunday, 11 May 2014 edition.