It’s Time to Dump Veterans Affairs Secretary and Faux-Vet “Battlefield Bob” McDonald for Incompetency and he Needs to Take his Faux-Vet Deputy, “Slow to Combat” Slone Gibson, with Him! 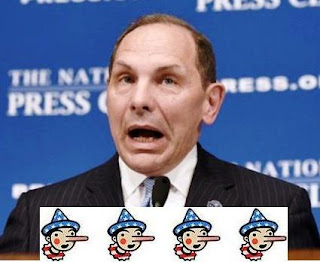 Seems every time VA Secretary “Battlefield Bob” McDonald or his Deputy “Slow to Combat” Slone Gibson open their mouths, they earn Four (4) Pinocchios from the Washington Post Fact Checker and every day there is another article where they are caught doing nothing to fix the VA or fire “bad apples” in the department!  Seems they are not only consummate liars but have gone native becoming part of the VA bureaucracy they were appointed to reform.  The problem is NOT money, it’s ineffective leadership at the top!  It appears “Battlefield Bob” suffers from “Clinton Syndrome” (The psychological disorder rendering the sufferer incapable of being truthful).

Almost two years on the job and with expedited disciplinary action authorized yet neither have done anything to fix the VA problems and are more interested in protecting the VA workforce than rooting out evil. That’s what you get when you select faux-Vets like "Battlefield Bob" and “Slow to Combat” Slone as VA Leaders. Both are West Pointers that bailed out of uniform the very second they could after the payback time for their free education - without ever even serving in a combat zone let alone hearing a shot fired in anger. Neither even bothered to remain in the Reserves as doing so might someday subject them to danger! So much for "Duty - Honor - Country!" and “a Cadet does not lie, cheat nor steal!” Both faux-Vets have demonstrated they possess the requisite detachment to continue the VA’s absolute indifference towards Vets.

It’s time for both of them to Go!  At least GEN Eric Shinseki, “Battlefield Bob’s” predecessor who was fired, was at least a well decorated combat Vet who was seriously wounded in action so had something in common with us real Vets.  The only thing these two clowns now there have demonstrated was their ability to avoid combat under any circumstances.

So what keeps earning “Battlefield Bob” the coveted Four Pinocchios, he keeps lying about how many people he's fired....

Remember on NBC Meet the Press back on 15 Feb 2015, “Battlefield Bob” uttered this lie:  “Nine hundred people have been fired since I became secretary. We’ve got 60 people that we fired who have manipulated wait times.”

Thankfully, within days the WaPo Fact Checker blew the whistle on “Battlefield Bob” and awarded him the prestigious 4 Pinocchios for wildly inflating his “firing” statistics.  Then in the 6 Aug 2015 article Fact Checking a statement by Jeb Bush that Only Two people had been fired for anything related to the scandal, the Fact Checker found he was absolutely correct when he made the statement although as of 6 Aug that number had risen to THREE!

Back then I posted on this Blog my take on this incident and the actual Washington Post Fact Checker article (if you’re interested) at: http://old-soldier-colonel.blogspot.com/2015/02/ineffective-veterans-affairs-secretary.html

Now doubling down on his previous lie, “Battlefield Bob” told this whopper on 6 November 2015 during his speech at the National Press Club:  “We have proposed disciplinary action against 300 individuals for manipulating scheduling.”

During this speech he even had the audacity to bemoan the lack of fact-checking of his assertions by saying: “I just wish that there would be more fact-checking on some of the numbers that are used, because there are a lot of myths out there.”  Obviously, the biggest myth turns out to be “Battlefield Bob” is capable of telling the truth, even under oath!  Maybe “Battlefield Bob” can file for VA benefits as he does suffer from “Clinton Syndrome."

Unfortunately, the Washington Post Fact Checker took “Battlefield Bob” up on his challenge and guess what, he again got his figures on wait-time manipulation disciplinary actions WRONG!

Seems “Battlefield Bob” says he was citing numbers in the VA’s 29 Oct 2015 which listed 306 disciplinary actions but that number contained 20 probationary employees as well as cooks, food service workers, voucher examiners and transportation supervisors, none of whom had anything to do with what was required to be reported!  Hence, the real number was 27 employees (one was a senior executive) had disciplinary actions proposed against them for patient wait-time manipulation and only three were successfully fired. The Senior Executive which was marked as successfully removed was actually fired for accepting improper gifts and not for “wait-time manipulation.”

This is the second time this year that the Washington Post Fact Checker has called “Battlefield Bob” out for inaccurately cited the disciplinary actions taken against VA employees for manipulating wait-time data and finding “a disturbing discrepancy” between the figure “Battlefield Bob” cited during the speech and the figure his agency is reporting to Congress.

It’s time for Faux-Vets “Battlefield Bob” McDonald and his Deputy “Slow to Combat” Slone Gibson to “hit the bricks” and hopefully President Obama can find a real Vet who actually cares about his fellow combat Vets to replace him and Fix the VA!

If you want to see what the Washington Post Fact Checker actually said, here is her entire article.


Glenn Kessler, The Washington Post Fact Checker, checked out the statements from four prominent politicians about drug user incarcerations and ranked them from most outlandish to least egregious characterizing Hillary Clinton’s as Absurd (4 Pinocchios), Bernie Sanders’ as Confused (3 Pinocchios), Carly Fiorina’s as Correct for Federal Prisons (2 Pinocchios), and President Obama’s as Correct for shear numbers but not for proportion (1 Pinocchios).

Here is what each said and how the Fact Checker graded them.

“We have a huge population in our prisons for nonviolent, low-level offenses that are primarily due to marijuana.”

The Fact Checker found Hillary’s statement “simply laughable” so her campaign did not even bother to offer a defense.  Hence, Clinton earned Four Pinocchios for her “absurd” suggestion that prisons are overflowing with marijuana convicts.

“We are imprisoning or giving jail sentences to young people who are smoking marijuana.”

Sanders confuses “arrests” with being sent to jail as most of the arrests do NOT lead to prison.  In the entire federal system just 187 inmates were sentenced for simple drug possession — of which only 75 were jailed for marijuana possession. Almost all drug offenders were convicted of drug trafficking.  Hence, Sanders earned Three Pinocchios for confusing arrests with jail sentences and Bernie Sanders and Hillary Clinton’s discussion on the subject is described by the Fact Checker as “almost a parody of the issue.”

“Two-thirds of the people in our prisons are there for nonviolent offenses, mostly drug-related.”

Fiorina is on target for federal prisons as more than half of all federal prison inmates were convicted of drug trafficking, often for dealing cocaine, and adding in other nonviolent offenses, such as property and immigration, you get to two-thirds of the federally sentenced offenders.

Fiorina at least can point to data backing up the general thrust of her statement but she still earned Two Pinocchios because her statement, while correct for federal prisons, was off when state prisons are added in.


“Over the last few decades, we’ve also locked up more and more nonviolent drug offenders than ever before, for longer than ever before. And that is the real reason our prison population is so high.”

The problem is the president’s phrase “the real reason.” It makes a difference whether just federal prisoners or state and federal prisoners are counted (he appears to be talking about both) and he makes the connection between drug offenders and rising prison populations too stark reaching back several decades.  His accretion here “is clearly wrong” as the proportion of Federal and State prison inmates who were drug law violators has been pretty nearly flat at 20 percent since 1990 as the number of people in prison on non-drug offenses has risen just as fast as drug law violators so the proportion has held constant.

About 52 percent of the growth in prison populations between 1980 and 2009 came from locking up violent offenders, compared to just 21 percent for drug offenders so locking up violent offenders explains 60 percent of the growth, to just 14 percent for drug offenders.  Any growth has come from admitting more people to prison, not from longer sentences as the president asserted and time served has barely changed in federal prisons, according to Justice Department data.

Obama can point to longer prison terms for more drug offenders, at least in terms of raw numbers, but runs into trouble when he says that’s the “real” reason for the size of the prison population. He earns One Pinocchio.

DON'T TAKE MY WORD FOR IT, HERE IS THE FACT CHECKER ARTICLE THAT APPEARED IN THE SUNDAY, 8 NOVEMBER 2015 WASHINGTON POST: