When There Is NO Bad News to Report at a Republican Campaign Rally – NBC News Manufactures Some!

I Wouldn't Believe Lester Holt or Anyone on NBC News Under Oath!

On the 17 August 2012 NBC News, Lester Holt led off with coverage of Republican Vice Presidential candidate Paul Ryan’s appearance at West Springfield (VA) High School and featured a short outburst by a lone heckler. Problem is, the heckler was obviously a NBC News Plant or at least it was prearranged with them or they NEVER could have caught it on camera. I was standing less than 15 feet from that one lone heckler (singular) who let out a 3 second outburst that was inaudible to me at that close range and then he was escorted out of the building. Unless NBC already had their camera and gun mike trained on him, by the time NBC reacted to turn their camera, the event would have been long over. This is shameful but their distorted reporting of the event is in keeping with NBC’s bias coverage.

In the entire 2 hour rally, that 3 second outburst was the ONLY disruption. What they should have reported about was the overflowing racially mixed crowd he was able to attract on one day’s notice and how enthusiastically he was received. This snippet of their newscast reminded me why I don’t get my news from NBC. I like to get facts not agenda!

It appears that when there is nothing derogatory to report at a Republican event, NBC just has to create (or even invent) something. they can't help themselves! If the wild fires out West begin to subside, I wouldn’t put it past NBC to begin lighting fires to keep the story going.
Posted by A_COL at 10:15 AM 1 comment:

Drones – UAVs – RPVs: The Argument for Why They are the Future of Military Aviation and Who Should be Flying Them!

Is it time to reestablish the “nothing can stop” the Army Air Corps? 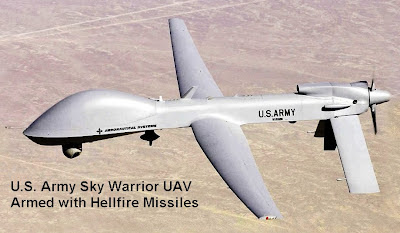 For an elaborate explanation why it’s only a matter of time before Military combat pilots are obsolete, you can check out my previous Blog article: “How Long Will It Be Before Air Force & Navy Cockpit Pilots Are Obsolete?” below but here is the Readers’ Digest version:

Drones will be “the inevitable future of Military aviation” as technology will eventually render most human piloted Military aircraft obsolete, not because of the obvious concerns for the safety of the pilot or the morality of killing with drones but because the limiting factor on manned aircraft performance is how much abuse the human body can endure. We know the limits of the human body but as aircraft technology continues to leap forward, we are going to reach a point where the aircraft will be able to “out perform” the pilot so the only way to take full advantage of the aircraft’s performance will be to remove the “limiting factor” – the pilot – from the cockpit. A drone can simply turn sharper and accelerate quicker than the human body can tolerate so an adversary’s drone will be able to defeat any piloted aircraft we field. And this doesn’t even consider a computer’s faster reflexes than a human to react to situations. In aerial combat, split seconds matter.

In July 2011, the U.S. Navy even got closer to routinely flying combat drones off carriers when an F/A-18 Hornet landed itself performing dozens of arrested landings without any input from the pilot onto the deck of the USS Dwight D. Eisenhower (CVN-69) using flight control software designed for the Northrop-Grumman-built Unmanned Combat Air System Demonstrator or UCAS-D.

Also, a good argument can be made that all man-piloted airframes will eventually become obsolete. Since December 2011 the US Marines have been operating the K-MAX unmanned aerial cargo haulers in Afghanistan and the aircraft has met all expectations with less than one maintenance man-hour per flight hour. The K-MAX has proven its value as a reliable cargo resupply aircraft and a lifesaving asset that eliminates the need for manned ground convoys so reducing warfighter exposure to improvised explosive devices. The Lockheed Martin and Kaman Aerospace-built K-MAX drone was designed to perform autonomous or remote-controlled cargo delivery in harsh environments and its features include a high-altitude, heavy-lift K-1200 airframe, as well as mission management and control systems to enable autonomous flight over long distances. The K-MAX has been so successful in validating its ability to deliver more than 6,000lb of cargo a day at sea level and more than 4,000lb at 10,000ft altitude that the US Army is now interested in adopting them.

Hence, it’s just a matter of time before even the “morality” arguments becomes moot as ALL combat aircraft become Unmanned Aerial Vehicles (UAV) as, unless we keep up with technology, our piloted combat planes will eventually be out performed and defeated by our adversaries’ drones. The value of the other uses for Remotely Piloted Vehicles (RPV) is obvious. Sorry, you can’t stop progress so it’s only a matter of time -- and I know this scares the Heck out of all Military pilots, especially Navy and Air Force Jet Jocks -- but your days are numbered! Sorry!

But the other purpose of this entry is to question why the Air Force is WASTING precious resources piloting UAVs with officers and especially highly paid Senior Officers (Colonels & Lieutenant Colonels), most drawing Flight Pay and retention bonuses, when the Army has proven that low ranking enlisted soldiers are just as capable of flying them.

Air Force leaders have argued that comparisons between its programs and the Army’s are misleading because enlisted soldiers fly smaller UAVs that don’t carry the same weapons load as Air Force Reapers and Predators but that argument has lost weight as enlisted soldiers are now flying the Sky Warrior — a UAV that is a foot longer and can carry 325 pounds more than the MQ-1 Predator. Sky Warriors armed with four Hellfire missiles were deployed into combat beginning last summer and the Army’s UAV Division team chief said “the debate over whether a UAV pilot should have a commission is moot as long as that pilot receives the right training….When you look at this and say, ‘Shouldn’t an officer be doing this?’ then that’s implying that officers are smarter than enlisted folks when in fact it’s just the difference of the training.”

The Army starts training its enlisted MOS 15W UAV pilots straight out of basic training. The pilots spend the first nine weeks in a common core UAV training before moving to training specific to the platform they will fly. Hunter and Shadow (small platform) training is 12 weeks and Sky Warrior training is 25 weeks. As of October 2011, the Army had trained 3,200 UAV enlisted operators.

Previously, Air Force Predator and Reaper pilots spend two to three months learning to fly UAVs at Creech Air Force Base, NV, however, these Air Force Officers had already been through years of pilot training and spent hundreds of hours flying manned aircraft.

In recognition of the inevitability of UAV warfare, last year the Air Force trained more drone pilots than the total number of conventional bomber and fighter pilots combined and in the last decade, the Air Force has pulled more than 250 manned fighters off the flight line and plans to retire 123 more next year. During that time, the Air Force drone fleet ballooned from 39 Predators, Reapers and Global Hawks to 280. Counting Army drones and those of other services, the tally of unmanned military aircraft is more than 7,000. Air Force Chief of Staff General Norton Schwartz recently acknowledge that: “Ultimately, it is conceivable that the majority of aviators in our Air Force will be remotely piloted aircraft operators.”

* The Air force Pilots would likely also qualify for an additional $25,000/yr Aviation Continuation Pay for each year they continue in service beyond their obligated term.

As a young Army officer in Vietnam, I remember well what happened when the Army (under the 1966 Johnson-McConnell agreement) relinquished the fixed wing C-7 Caribous, mostly flying in Vietnam, to the US Air Force in exchange for an end to restrictions on Army rotary wing operations. On 1 January 1967, the 17th, 57th, 61st, 92nd, 134th, and 135th Aviation Companies of the U.S. Army were inactivated and their aircraft transferred respectively to the newly-activated 537th, 535th, 536th, 459th, 457th, and 458th Troop Carrier Squadrons of the USAF. On 1 August 1967 the "troop carrier" designations were changed to "tactical airlift.”

The untold story here was when the Army was flying the C-7s, each Army Aviation Company of 24 Caribous was commanded by a Major with a captain leading each platoon of 8 aircraft and a few lieutenants but mostly warrant officers piloting the planes. When the Air Force took over, each Major was replaced by a Lieutenant Colonel Squadron Commander and each Captain platoon leader was replaced by an Air Force Major Flight Leader. The Warrant Officer pilots were all replace by AF commissioned officers although several Army Warrants accepted AF Direct Commissions to keep flying them. Bottom line was, it cost the AF at least 25% more in salaries to fly the same planes doing the same missions as the Army was flying!

Hence, there is an historical precedent for the Air Force “high price” approach to every mission. Never spend a dollar when you can spend two to accomplish the same thing! Maybe it’s time to disestablish the Air Force and turn their mission back over to the Army Air Corps!
Posted by A_COL at 10:12 AM 5 comments: