In his 4 July 2012 Washington Post Opinion piece: “The military needs to reach out to civilians” (http://www.washingtonpost.com/opinions/general-dempsey-the-military-needs-to-reach-out-to-civilians/2013/07/02/b10c3bb0-e267-11e2-aef3-339619eab080_story.html) Joint Chiefs of Staff Chairman Gen. Martin E. Dempsey provides his explanation of why the disconnect between the general US population and the Military and offers some solutions. He contends: “The last decade of war has affected the relationship between our society and the military. We can’t allow a sense of separation to grow between us. As the all-volunteer force enters its fifth decade, civilians and the military need to maintain the shared understanding necessary for a healthy relationship.” 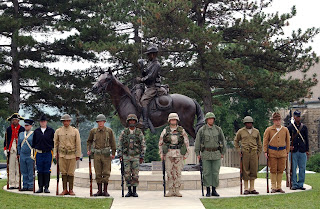 As someone drafted in 1966 as a high school grad who attended OCS with a US serial number, went to Vietnam as a young second lieutenant not yet old enough to legally drink and extended to return home a mature captain with a CIB; and who commanded four companies, was a combat battalion XO and a combat battalion commander leading both Draftee and VOLAR soldiers in peace and war, I bring a little different perspective to this discussion. I do agree there is a disconnect between today’s military and the average civilian but I believe the reason might be the difference in magnitude of the wars.

Let’s stipulate that all modern conflicts pale in comparison to World War II where the US population was “all in” and almost everyone was touched in some way by the war. The US lost almost half a million men out of a 1940 US population of 132 million. The 36-day Iwo Jima assault resulted in more than 26,000 American casualties, including 6,800 dead while the 82-day Battle for Okinawa, by far the bloodiest battle of the Pacific Campaign, lasted from early April until mid-June 1945 and U.S. (5 Army and 2 Marine Corps Divisions) casualties were over 62,000 with over 12,000 killed. And the Pacific was a side show compared to the casualties suffered in the European Theater. The Battle of the Bulge alone lasted 40 days (16 Dec 44 – 25 Jan 45) with over 81,000 U.S. casualties and 19,000 killed. This was ALL OUT WAR!

But since WWII, the US has engaged in several conflicts varying in scope from Korea to Afghanistan but a review of the significant ones might provide some insight into why the average American has become so increasingly disengaged. Discounting the skirmishes between Vietnam and our present wars where our military saw minor combat in Grenada (total lost from all causes = 19), Panama (24), and The Gulf War (293), since WWII the US has committed major combat formations in Korea, Vietnam, Iraq and Afghanistan.

The Korean War lasted just over 3 years (37 months) and total in theater losses were 36,516 or 32.4 killed per day and the 1950 US population was 151 million. Korea was fought initially by the peacetime draft-lapsed Army but quickly resorted to both calling up the reserves and National Guard and the Draft. Hence, most Americans were deeply involved and likely knew someone in combat and even someone killed.

Although The Vietnam War lasted 10 years, 51,585 of the total 58,220 killed occurred during the real 5 years (1966-70) of the war when we were heavily engaged (at the height of that war in 1968 we were losing 50+ a day killed and in May 1968 alone we had 2416 Killed!). For comparison, 1967-69 were the years of heaviest combat where 39,361 were killed in theater or 35.9 killed per day; and the 1965 US population was 191 million. Very few reserves and National Guard were called up for the war and the military did rely heavily on the draft although the Washington Post in a 1986 in depth examination of who actually fought the Vietnam War entitled "The Myth of the Vietnam Vet" stated: "The man who fought in Vietnam is typically depicted as a draftee, unwilling and probably black. In fact, 73 percent of those who died were volunteers and 12.5 percent were black (out of an age group that comprised 13.5 percent of the male population)." Regardless, most American communities were touched by the War, either knowing a causality or in fear of a loved one being drafted and sent to War.

Our latest Wars in Iraq and Afghanistan are much different than these previous conflicts in that they are being waged with a totally volunteer force and the causalities are so much lighter than before. The US Military was engaged in Iraq from 2003 to 2011 and US losses were 4486 from all causes out of a 2010 US population of 309 million. For comparison the three most combat intense years were 2005-07 where 2573 were killed or an average of 2.35 per day. Afghanistan causalities have been even lighter and since 2001 to present 2229 have been killed. Again for comparison, the three years of heaviest combat were 2009-2011 with 784 total killed or an average of .72 killed per day.

I believe every service member’s life is precious so I wouldn't diminish the death of a single one but since 1972 we’ve had an “all Volunteer” Military so those of us who served signed up for it knowing the dangers so I hope none of us is looking for sympathy. My point, over the years we Warriors have become detached from the general population. Fewer serve because fewer are needed. Because our engagements result in fewer causalities, very few Americans even know a Soldier let alone one that has been killed. When GEN Dempsey says “Children of those in the military are far more likely to join than the children of those who are not.” He is stating something that has always been true. In my case, the Military was “the family business;” my father was a career Officer and my immediate family of father, brothers and my kids have well over 100 years of active duty in uniform. And I just come from the typical “military family.”

I would make one final observation as someone who over a 30 year career went from draftee Private to Full Colonel: over the 238 years the US Army has existed, weapons and tactics might have changed but soldiers are soldiers and they have not. The draftee I led in Vietnam and the Volunteer I saw when I was in Afghanistan or the many I served with in the intervening years have all shown the same dedication and professionalism that I suspect were exhibited by all those of previous generations of service members. Although maybe a little more disconnected from the general population than those of some previous conflicts, they are Americans first and we should all be proud of those who serve.

In writing this I am not trying to offer a solution or even suggesting we need a return to the Draft, I’m just offering an alternate perspective as to why the disconnect exists between the military and American population exists.
Posted by A_COL at 12:06 PM No comments: