On 6 December 11, President Obama gave a fairytale of a speech in the Kansas City suburb of Osawatomie, Kansas where he unsuccessfully sought to rebut Republican arguments that he is waging class warfare. Here was the “enduring’ sound bite from the speech that earned the Prez 3 Pinocchios from the Liberal Washington Post Fact Checker:

“I mean, understand, it's not as if we haven't tried this theory. Remember in those years, in 2001 and 2003, Congress passed two of the most expensive tax cuts for the wealthy in history. And what did they get us? The slowest job growth in half a century.” - President Obama – Dec 6, 2011

Granted, this was not up to his 4 Pinocchio standard but here is how the WaPo judged the accuracy of Obama’s facts:

Inserting the words “for the wealthy” was interesting phrasing by the president, since he suggests these tax cuts were intended to only benefit the rich.

The bulk of the 2001 tax cuts were marginal rate cuts, which extended to all taxpayers and the 2003 tax cuts included a reduction in taxes on dividends and capital gains but the 2001 tax cuts also included tax changes that benefited the middle class, such as a reduced marriage penalty and expanded tax credits, along with an instant tax rebate. While benefits also flowed to the wealthy, let’s not forget they still pay 90% Federal income taxes. The WaPo chided Obama for suggesting that the Bush tax cuts were only aimed at the wealthy since that is NOT correct.

The WaPo and said that is a stretch for Obama to blame slow job growth on the tax cuts and that it was silly to directly link the ten-year-old tax cut to today’s job growth. Also, Obama’s claim of the “slowest job growth,” in fact, includes the loss of jobs under his administration. The White House “evidence” for his claim was a New York Times blog report based on Gross Domestic Product data through 2010 which included the first 2 years of Obama’s administration! The White House also cited a Center on American Progress report on job growth through 2007, which showed monthly job growth of 68,000 jobs during the Bush business cycle. But, since the recession ended, job growth has been even more anemic under Obama—just 40,500 jobs a month.

Obama might have inherited a poor economy but blaming poor job growth on the Bush tax cut is bogus when Obama himself pushed through a nearly $1-trillion stimulus and took other actions that have affected the economy – Obama owns this economy for better or for worse!

Then, Obama blames the Bush tax cuts for “massive deficits” but according to the WaPo the biggest contributor was increased spending and incorrect CBO estimates. The Bush and Obama tax cuts were responsible for just 24% of the deficit so it is simply wrong to only blame the Bush tax cuts for the deficits now, especially three years into another presidential term. And what does the White House offer of evidence of their bogus claim? A TV clip off the left-leaning website Think Progress. Gimma a break! An administration official even had to conceded to the WaPo they had no actual data to back up the president’s assertions!

When it comes to taxes, let’s not forget the legendary statement of Judge Learned Hand—as long as it is not illegal, people can try to lower their taxes as much as possible. Over and over again the Courts have said that there is nothing sinister in so arranging affairs as to keep taxes as low as possible. Everyone does it, rich and poor alike and all do right, for nobody owes any public duty to pay more than the law demands.“

The WaPo found the top 400 taxpayers--all billionaires for 2008 paid an average tax of nearly $50 million each!

The Pinocchio Test – What earned the Prez 3 Pinocchios:

The president larded his case with such suspect data that is impossible for him to justify blaming tax cuts for being mostly responsible for today’s slow job growth, especially when he wants to retain a good chunk of those tax cuts. Then to bolster his case about unfairness, the president relied on a suspect statistic about billionaires paying as little as one percent in taxes. Seems the President pulls his “facts” out of thin air and then convinces himself it's the truth.

To see the entire Washington Post Fact Checker article, enlarge the below graphic. 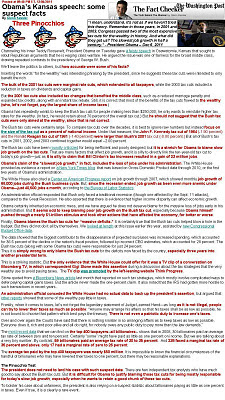