Appears Joe Biden is trying to upstage his boss by at least tying him for the Washington Post (WaPo) Fact Checker Biggest Whopper Award - FOUR PINOCCHIOS!

Does anyone really believe Joe Biden, the quintessential political idiot, is qualified to be Vice President? Every time Joe speaks, I listen with anxious anticipation confident he will commit some “world-class” gaffs to provide comic relief. He is the reason every American should pray each evening for Obama's good health as he will surely go down in history as the dumbest and most inept vice president of all times; by comparison he makes Bachmann appear cerebral, Palin intellectual, and Dan Quayle absolutely brilliant. I suspect Obama keeps him around partly because it makes him look good by comparison.

Hence, true to form Joe has been telling some real whoppers (in the WaPo's words, not mine)in an effort to sell another failed stimulus package and read this Fact Checker for the details. Click on it a couple of time to enlarge it if you're having trouble reading it.

For a fuller picture of how dumb Old Joe “the Gaff-mister” really is, I have posted a compendium of "Dumb Biden-isms” on my Blog so scroll down a bit because some of them are a real hoot. 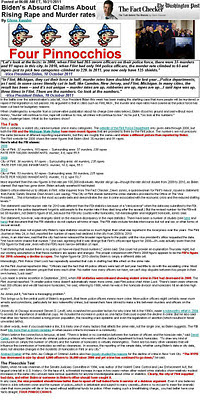 Once again even the Liberal Washington Post (WaPo) had to call Senator Harry Reid to task for his 17 Oct bold faced lie falsely accusing Republicans that: “… they don't want to do anything that's constructive.”

It should be noted the Republicans tried to bring the President’s exact Jobs bill as submitted to a Senate vote immediately after he submitted it but Reid used the “nuclear option” to procedurally kill it because he knew it would embarrassingly fail not even getting a majority of Democrats to vote for it. Dems have to run for reelection too! Reid did bring up his modified version of the Obama Bill last week but even that failed to advance to a vote with some Democrats voting against it. Now Senate Democrats plan to bring Obama’s bill up in pieces.

The WaPo Fact Checker examined Reid’s assertion that Republicans in the Senate “don’t want to do anything that’s constructive” and concluded it warranted 3 PINOCCHIOS – just one short of their Max but still a pretty big Whopper!You can read the entire WaPo Fact Checker article by clicking on the below image to enlarge it but here is the “Readers’ Digest” version:

…and here is what Congress has done:

On 15 Aug Obama said: “You know, trade deals haven’t always been good for America. There have been times where we haven’t gotten a fair deal out of our trade deals. But we’ve put together a package that is going to allow us to start selling some Chevys and some Fords to Korea so that — we don’t mind having Hyundais and Kias here, but we want some ‘Made in America’ stuff in other countries. That’s something that Congress could do right now.”

The trade bills were approved by Congress last week. In fact, Obama hosted the president of South Korea and traveled with him to Michigan, making the case that this bill will mean more American jobs. It should also be noted that these agreements were negotiated by George Bush but Obama did even submit them to Congress until just before they passed. When Obama made his 15 Aug statement, he hadn’t even submitted the legislation to Congress. It should also be noted that Reid opposed the trade deals, believing them to be job-killers.


On 20 Aug Obama pushed for trade adjustment assistance for workers who lost their jobs to free trade: “Let’s pass trade deals to level the playing field for our businesses. . . .These are common-sense ideas – ideas that have been supported by both Democrats and Republicans. The only thing holding them back is politics. The only thing preventing us from passing these bills is the refusal by some in Congress to put country ahead of party. That’s the problem right now. That’s what’s holding this country back. That’s what we have to change.”

That bill passed in September, paving the way for the trade deals.

On 15 Aug Obama demanded action on patent reform: “Patent reform is something that a lot of folks don’t talk about, but our entrepreneurs, when they come up with a good idea, if we could reform how that system works and cut some of the red tape, we could have entrepreneurs creating businesses like Google and Microsoft right now, all across the country. But we’ve got to make this investment, and Congress could make that decision to make it happen.”

An extension of FAA funding through January was passed in September.

On 31 Aug Obama called for a renewal of the transportation bill: “This transportation bill has been renewed seven times in the last two years alone. That’s why my Secretary of Transportation, Ray LaHood — a Republican — is with me today, along with David Chavern from the Chamber of Commerce, and Rich Trumka of the AFL-CIO — two organizations who don’t always see eye-to-eye on things — because they agree on how important it is for our economy that Congress act now.”

A bill providing for highway funding through March passed in September too.

So what the bottom line that got the Dems the Big 3 Pinocchios?

Reid is being untruthful when he accuses the Republicans of not wanting “to do anything that's constructive.” The fact is that a number of major bills demanded by the president have passed with bipartisan support and several of the elements of the Obama jobs bill have Republican support but the disagreement between the parties is how to pay for it.

Reid may disagree with the GOP stance on tax increases, but it is misleading to suggest that Republicans have blocked legislation of importance to the president. 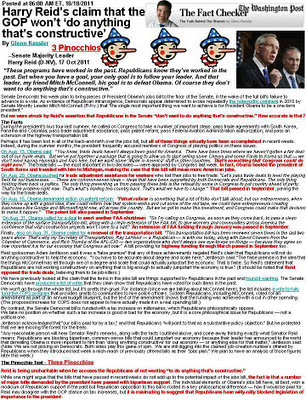 Debbie has always had a hard time distinguishing fact from fiction so most people wouldn’t believe anything she says, even under oath, but lately she must be living in an alternative universe.

After consistently achieving Four Pinocchios, the highest rating for lying on the Washington Post (WaPo) Fact Checker scale, I’m sure Debbie will be “throwing the Red Flag” to ask for an official review after only achieving three on the 6 Oct 11 Checker for her falsehood laden 5 Oct rant accusing Romney of wanting to privatize Social Security.

I’m sure she will be redoubling her efforts because she is falling behind her nearest competitor, Nancy Pelosi. Debbie scored a huge FOUR for her 12 June 11 NBC “Meet The Press” appearance where she claimed Obama had created 2.1 million private-sector jobs since he’s been in office when the Facts, according to the WaPo, are he has lost 2.5 Million. According to the WaPo, “Obama is on track to have the worst job record of any U.S. president since World War II. He may even become the first president in the modern era with no net jobs created during his first term — which, by any stretch of the imagination, is a stunning statistic.”

Then her Dem rival Pelosi earned Four Pinocchios on 29 Sep 11 for her “Really BIG” whopper that GW Bush raised the National Debt by 115% while Obama only raised it 16% when The Truth (according to the WaPo) is GW Bush raised it 5.6% while Obama increased it 24.6%. Nancy never has been good at Math… witness the fact she never even bothered to bring up a Budget Bill during her abbreviated House Speakership! But, come-on Debbie, we're rooting for you to maintain your Pinocchio preeminence!

Below is Debbie's Whopper verbatim from the WaPo so read it and see for yourself the lengths Debbie and her minions will go to distort the truth and twist fact. Drill down on it to enlarge it for easier viewing. Also, scroll down below for latest Nancy’s Four Pinocchio effort as well as Debbie’s previous Four Pinocchio “Meet The Press” moment. Thrown in as a Bonus below is President Obama’s 5 Sep Four Pinocchio Whopper for the president’s Detroit Labor Day speech where he made several fallacious assertions, most notably his claim he passed the “biggest middle-class tax cut in history.” The word the WaPo used to describe this claim: “ridiculous!” Click on the actual article below to enlarge it for easy reading if you want the full text.

Turns out the only thing “historic” about Obama’s claim was the audacity it took to make it. As the WaPo put it, “anytime a politician claims he or she has done something historic… that’s usually a dubious claim.” And what exactly was the source for Obama making such an outlandish claim (that incidentally the WaPo proved untrue), a report based on a White House fact sheet. Furthermore, The WaPo states they “found evidence that Obama knew he was saying a whopper” when he made the untrue claim. 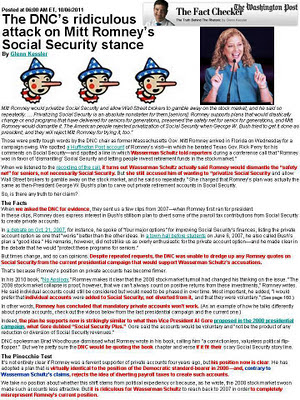 Pelosi Again WINS FOUR PINOCCHIOS for Lying About Who Increased the National Debt Most - Bush or Obama! 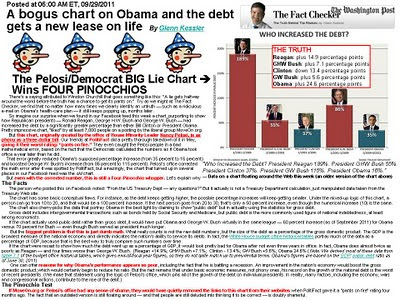 Know how you can tell if Nancy Pelosi is lying? Her lips are moving!

You can’t make this stuff up but when the Washington Post Awards House Democrat Leader Nancy Pelosi FOUR PINOCCHIOS two times in a row, you got to wonder if her nose is actually beginning to grow. This time is was a whopper of such magnitude one has to wonder if she is even capable of distinguishing fact from fiction. I suspect she is just so gullible she believes and posts on her website anything liberal lie organs like MoveOn.Org tells her. Regardless, we should expect more from all elected officials and especially those in the leadership.

To read the full expose as printed in the Sunday/2 Oct 2011 WaPo, double click on the above graphic to enlarge it but here is the Readers Digest version:

The ONLY PROBLEMS was, the chart is (according to WaPo) “as phony as a three-dollar bill.” Despite the fact PolitiFact exposed it as a lie way back in May (4 months ago) awarding it their worst rating: “pants on fire,” Pelosi shows she has NO sense of shame because she still has links to this chart from her websites. If she is still deluded into thinking it to be correct — she is doubly shameful.