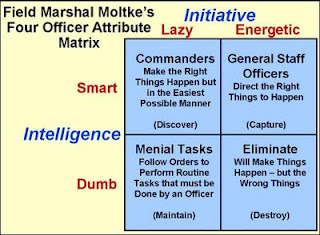 • Smart & Lazy: I make them my Commanders because they make the right thing happen but find the easiest way to accomplish the mission.
• Smart & Energetic: I make them my General Staff Officers because they make intelligent plans that make the right things happen.
• Dumb & Lazy: There are menial tasks that require an officer to perform that they can accomplish and they follow orders without causing much harm
• Dumb & Energetic: These are dangerous and must be eliminated. They cause thing to happen but the wrong things so cause trouble.

Later Field Marshal Erich Von Manstein (1887-1973), arguably the Wehrmacht's best World War II military strategists who was dismissed from service by the Fuhrer in March 1944 due to frequent clashes with him over military strategy, later articulated Field Marshal Moltke’s model in the following quote:

I would suggest that both Field Marshals have correctly identified the four types of officers but would respectfully disagree about who is best suited for “highest office,” especially in today’s highly competitive environment. Smart & Energetic wins every time and only the truly driven or exceptionally lucky succeed.
Posted by A_COL at 8:44 AM