With over four years serving at the highest levels of command in Iraq, it is arguable that GEN Odierno is the World's most savvy expert alive on the subject of fighting in Iraq so it isn't surprising that he spent much of his 12 August final Pentagon press conference reflecting on Iraq. 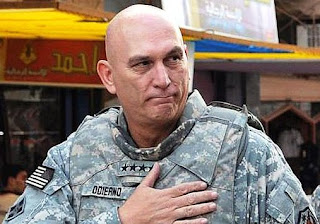 “I believe that if we find in the next several months we’re not making the progress … we should probably absolutely consider embedding some soldiers with them, see if that would make a difference,” GEN Odierno said. “That doesn’t mean they would be fighting, but maybe embedding them and moving with them...."  This not something new as in the past GEN Odierno has said that embedding US troops, who have been training and advising the Iraqis since last year, “probably would make them more effective.”


GEN Odierno retired from the Army two days later on 14 August after serving four years as the Army Chief of Staff.  With almost 40 years of service including well over four years in Iraq, more than any other Military General Officer, he might know what he's talking about.  In addition to commanding all forces in Iraq as the Commander, Multi-National Force-Iraq (Sep 08 - Sep 10); he had previously served in Iraq as Commander, Multi-National Corps-Iraq (Dec 06 - Feb 08); Commander, 4th Infantry Division (Mar 03 - Apr 04); and during Desert Storm he had been the Executive Officer, Division Artillery, 3rd Artillery Regiment, 3rd Armored Division (Dec 90 - Jun 91).  Hence, he might be on to something when he suggests embedding US Troops in Iraqi combat formations.  This would not be a new concept in that during the Vietnam War we embedded US Advisor in all Republic of Viet Nam (RVN) combat formations and it proved very effective.  Although the US might have technically lost the War, it is indisputable that neither any US Forces nor any of our RVN allies with embedded Advisors were ever defeated on the battlefield.


Now this is a subject I do have a little first hand knowledge about.  As a new Second Lieutenant (2LT) out of OCS but with some prior enlisted service, I was sent to Vietnam and, because I was fortunate enough (or unfortunate depending on your perspective) to have passed the Vietnamese Language Test, I was assigned as an Advisor embedded in an Army of the Republic of Viet Nam (ARVN) Infantry unit.  During my extended tour I came to admire the fighting spirit and bravery of the ARVN Soldier but their leadership was unimpressive.  Many of the officers lacked initiative which might have been a result of the consequences of failure.  You couldn't fail if you didn't act but what was worse than failing was for their Advisors to go up the "advisory chain" complaining about their inaction to their superiors.  During my extended tour I went from green 2LT to combat seasoned First Lieutenant (1LT) to experienced Captain (CPT) where I was then the Senior US Soldier embedded in the unit.


I can't speak for all US Advisors but I suspect my experience was representative of what many of us found.  Although we did not command the ARVN units, once we had proven our competence, when we spoke our ARVN counterparts accepted our "advice" like they had "heard it from a burning bush."  Embedded US Troops provided the leadership that the ARVN units needed to become an effective fighting force.  Although I've been to Afghanistan, I've never served in Iraq so I don't know if US Advisors would have the same effect on Iraqi combat formations but it would certainly worth a try.  I do know that the North Vietnamese Army (NVA) was a battle hardened force with 40+ years of experience fighting on their home turf yet they never won a single battle against a RVN Unit with embedded advisors.  It wasn't until US Combat Forces which included Advisors were withdrawing in 1971-73 that ARVN units started losing engagements.


Operation Lam Son 719, a limited-objective offensive campaign conducted February - March 1971 in the southeastern portion of the Laos by RVN Forces was the first major operation conducted without embedded US Advisors and the results were devastating.  Although both the US and RVN Presidents "spun" the operation as a roaring success and proof "Vietnamization" was working, it had really exposed grave deficiencies in the South Vietnamese military's planning, organization, leadership, motivation, and operational expertise -- expertise that had previously been provided by US Advisors.


So why were we accepted by the ARVN commanders?  Because when we got into some "bad shit," the American Advisor or "cố vấn  Mỹ" could call in a very accurate US Artillery fire mission and adjust fire, could get US Attack Helicopter gun ships on station and on occasions could even get fast movers (Air Force Close Air Support) to wreck havoc on the enemy. We could even get US "Dustoff" Medivac helicopters to come in to hot LZs, something ARVN pilots were reluctant to do.  I found that over time the last thing my counterpart wanted was for anything to happen to me -- which was very comforting.  Although initially accepted for the support we could provide, any Advisor "worth his salt" soon found himself "virtually" in command of the unit.


Embedding US Advisors in Iraqi Combat Units is not without risks and Advisors do have to participate in ground combat by virtue of where they must be physically located in order to be effective and to be credible, an Advisor has to share in the risks which means leading from the front.  Hence, US Advisors are “boots on the ground,” especially Advisors embedded at the company and battalion levels.  You can’t call in or adjust artillery from the rear, you can’t coordinate air support from the rear and you certainly can’t laze a target for a Fast Mover from the rear.  These are task that require the advisor to SEE the target and to see the target you must be out front where the danger is.


Like I said in the beginning, I don’t know if GEN Odierno’s suggestion of embedding US Troops in Iraqi units will work but what I DO know is that what we’re doing now is NOT working so we need a change of tactics ASAP before it’s too late. I also know that embedding Advisors in RVN units worked against one of the most experienced, dedicated and battle hardened enemies we’ve ever faced.  And finally, I know that If conditions on the ground continue to deteriorate, there will come a time when the only viable option remaining to salvage the situation will be a major deployment of US Ground Forces, probably in the range of 75,000 to 100,000 troops, which is something body wants to see happen.  A modest deployment of 7500 to 10,000 Advisors now is certainly worth the gamble.
Posted by A_COL at 2:37 PM

Labels: embedding US Troops in Iraqi Combat Units, Odierno, US Advisors in Iraq