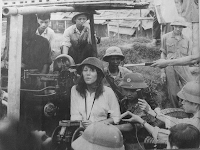 Newsweek’s 22 & 29 Aug 2011 Double Issue featured an extremely laudatory piece on Fonda but this was my favorite passage in this entire article: “….her perceived antipathy for veterans during the Vietnam War ….” If “Hanoi Jane’s” actions could be described as “perceived antipathy,” as a Vietnam Vet (actually extended there) I’d hate to be around if she were to ever really get pissed off at me.

For the record Fonda visited Hanoi in July 1972 and made several false anti-American accusations that the North Vietnamese used for propaganda. During her trip, Fonda made ten radio broadcasts in which she denounced American political and military leaders as "war criminals;" her most egregious accusation was she falsely accused them of deliberately targeting the Red River dike system which, if true, might have drown as many as 200,000 people.

A contemporary 7 Aug 1972 Time Magazine article “VIET NAM: The Battle of the Dikes”
(http://www.time.com/time/magazine/article/0,9171,8... ) refuted this allegation and contained this passage:

“During (Columnist Joseph Kraft’s) own current tour of North Viet Nam, Kraft reasoned that if the U.S. Air Force were "truly going after the dikes, it would do so in a methodical, not a harum-scarum way." Summarized Kraft: "I have to conclude from what I have seen that there is no deliberate American drive to bomb the dikes. But the dikes do run parallel to many roads. Some are close to railroad tracks and bridges." Inevitably, some dikes have been hit in error, Kraft believes, and the damage—also inevitably —has been exploited by the North Vietnamese for propaganda purposes.

Kraft's conclusion supported the US officials version, that the dikes were not being "targeted," but that a few dikes near military targets had been accidentally damaged. The State Department released the results of a photo-reconnaissance of the entire Red River Delta taken in mid-July which revealed bomb craters at only twelve locations in the dike system—ten of them near petroleum storage tanks, and all relatively minor. The evidence showed conclusively that there has been no intentional bombing of the dikes.

I would only point out that Joseph Kraft (1924-1986), a former John F. Kennedy speechwriter, and Washington Post and New York Times reporter with a syndicated column running in over 200 papers was in North Vietnam at the same time as Fonda and was NO friend of Nixon's or the War; he was even on Nixon's "Enemies List" and was highly critical of the Vietnam War. Kraft would have jumped on any opportunity to disparage Nixon or the War if something had been there. There wasn't!

During the visit, Hanoi Jane even had the audacity to be photographed manning an anti-aircraft battery and there are persistent rumors that some POWs were forced to meet with her and she spat on them, called them "baby-killers." Then, when some POWs attempted to sneak notes to her to let their families know they were alive she turned the note over to the North Vietnamese which led to the prisoners being tortured.

To be fair, in a 1988 Barbara Walters interview Fonda expressed regret for some of her comments and actions saying: "I would like to say something … to men who were in Vietnam, who I hurt, or whose pain I caused to deepen because of things that I said or did…. I was thoughtless and careless … I want to apologize to them and their families… I will go to my grave regretting the photograph of me in an anti-aircraft gun, which looks like I was trying to shoot at American planes…. It was the most horrible thing I could possibly have done. It was just thoughtless..."

Of course her apology came at a time when a group of New England Veterans had launched a campaign to disrupt a film project she was working on so Hanoi Jane's apology might ring a tad hallow and have been motivated more by self economic interest than remorse.
Posted by A_COL at 8:22 AM