Does Tom Hanks have no shame? Not only did he produce HBO's "Game Change" - a Democrat hit piece masquerading as entertainment and history (see my critique of that piece of trash below) but had the audacity to continue trying to mislead the public in his 17 minute Obama campaign film “The Road We’ve Traveled.” Here, even the Washington Post Fact Checker had to call him out and award him THREE PINOCCHIOS for his series of out right misstatements about Obama and his mother, Stanley Ann Dunham, including these concerning her health insurance. (See below graphic to see what the WaPo Fact Checker actually said.)

Narrator Tom Hanks: “He (Obama) knew from experience the cost of waiting [on health care reform].”

President Obama : “When my mom got cancer, she wasn’t a wealthy woman and it pretty much drained all her resources”

Michelle Obama: “She developed ovarian cancer, never really had good, consistent insurance. That’s a tough thing to deal with, watching your mother die of something that could have been prevented. I don’t think he wants to see anyone go through that.”

Hanks: “And he remembered the millions of families like of his who feel the pressure of rising costs and the fear of being denied or dropped from coverage.”

This series of words and images was a blatant attempt to perpetuate the misleading falsehood first evokes by candidate Obama during the 2008 campaign that his mother, Stanley Ann Dunham, fought with her insurer over whether her cancer was a pre-existing condition that disqualified her from coverage. During the campaign Obama frequently suggested his mother had to fight with her health-insurance company for treatment of her cancer and said: “For my mother to die of cancer at the age of 53 and have to spend the last months of her life in the hospital room arguing with insurance companies because they’re saying that this may be a pre-existing condition and they don’t have to pay her treatment, there’s something fundamentally wrong about that.”

If this had been true, I would agree with Obama that there would have been “something fundamentally wrong about that.” But as journalist Janny Scott reveals in her excellent biography, “A Singular Woman: The Untold Story of Barack Obama’s mother,” letters from Dunham to the CIGNA insurance company clearly shows her dispute was over disability coverage, not health insurance. Disability coverage helps replace lost wages due to illness and has NOTHING to do with Medical Insurance. When she became ill, Dunham was working in Indonesia for Development Alternatives Inc. of Bethesda and her base pay was $82,500, plus housing and car allowances. Her 1995 salary is the equivalent of $123,000 today.

Dunham died in 1995 of uterine and ovarian cancer and her health insurance covered most of the costs of her medical treatment…The hospital billed her insurance company directly, leaving her to pay only the deductible and any uncovered expenses.

The White House dismisses the President’s misstatements as: “The president has told this story based on his recollection of events that took place more than 15 years ago.”

So how does Hanks deal with this story? He never directly repeats Obama’s false claim that his mother had to fight for treatment in her hospital room because she was being denied health insurance coverage but look at what Hanks' film does say:

1. Hanks says: “The president knew the cost of waiting on reform.” (Though disability coverage was not an issue in the health care debate.)

2. The president says cancer “drained all her resources.” (Health insurance paid most of her bills, so this is not the case of someone being bankrupted by tens of thousands of dollars in bills and her today’s equivalent salary of $123,000 should have provided her some savings.)

4. The first lady also suggests the death “could have been prevented.” (That’s not an insurance issue! Dunham skipped an important test recommended by her US doctor that might have spotted the cancer earlier and then her Indonesian doctor later diagnosed her problem as appendicitis and removed her appendix. By the time the cancer was finally discovered it was third-stage.)

5. Hanks says that Obama’s family felt “the pressure of rising costs and the fear of being denied or dropped from coverage.” (She was NEVER in jeopardy of losing health insurance.)

Bottom line, Hanks' Obama propaganda film creates a false impression very similar to Obama’s 2008 campaign rhetoric that his mother was denied health-insurance coverage that drained her resources and with better coverage she might have lived longer. Nothing could be further from the truth! To skirt the truth the film never uses the words “health insurance” but instead the first lady says “insurance” and Hanks says “coverage” which gives them the out that they were not really out right lying but were talking about disability insurance. Only problem, disability insurance is different than health insurance coverage and has nothing to do with Obama’s health care law.

So what earned Hanks and his film Three Pinocchios? Hanks goes out of his way to give the false impression that Dunham was involved in a fight over health-insurance coverage rather than disability-insurance. Hanks must have known he had a problem with his film or he would have used Obama’s false 2008 campaign phrases like “pre-existing conditions,” “health insurance,” and “treatment.” Instead, he just arranged the quotes and images to leave the misleading and false impression of what really happened. This was an effort consistent with his other "falsehood filled" film, "Game Change!" Good Job Tom! 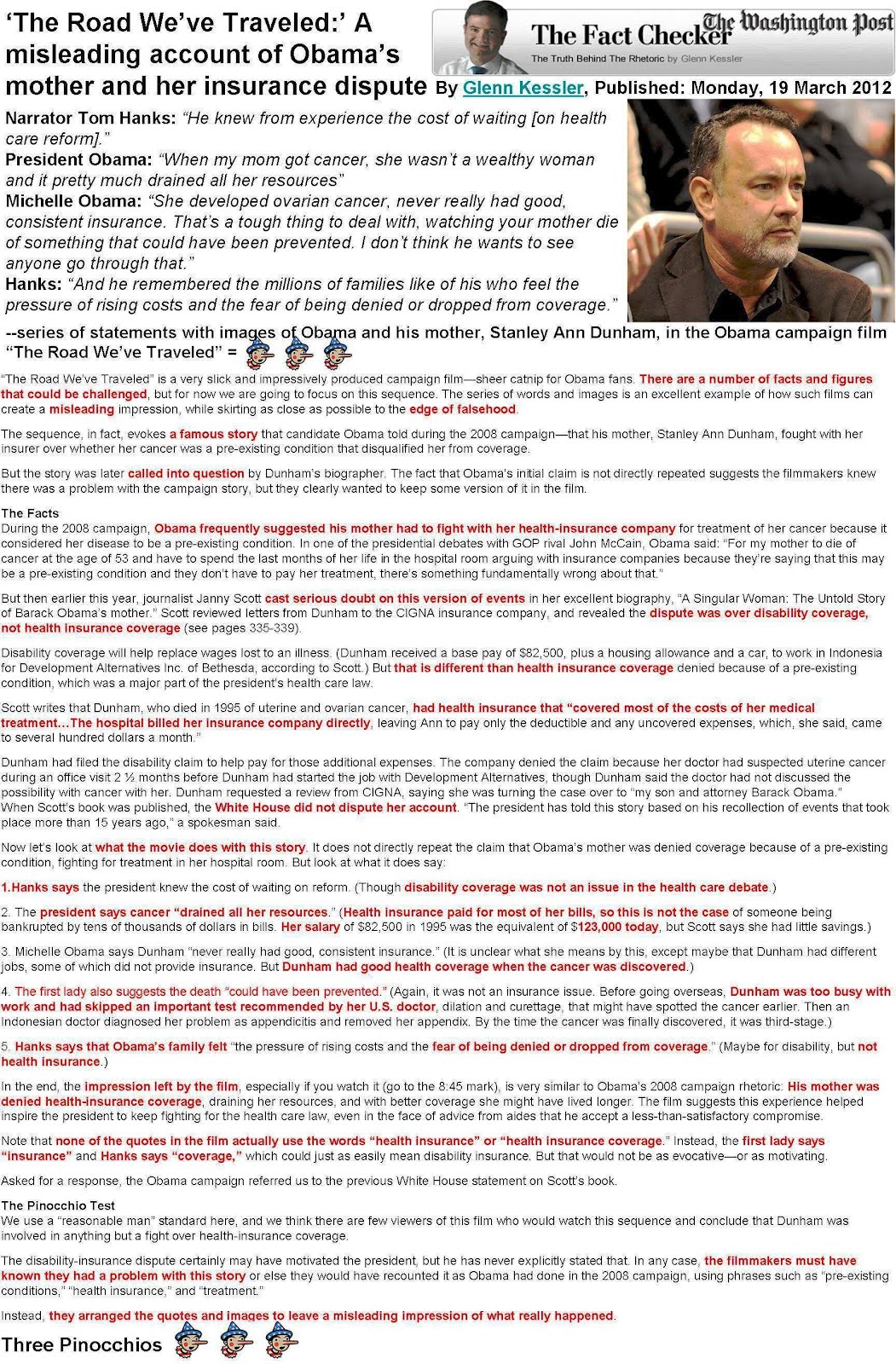